According to the eighth chapter of Devi Mahatmya from Markandeya Puran, there was a demon by the name of Raktabija (blood-seed, literally). He had been given a boon by Lord Brahma that every time a drop of his blood fell on the ground, his strength would increase many times, by his blood creating more of his own. Having received the boon, he had made the life of people on earth miserable.
Goddess Durga was entrusted with the responsibility to eliminate the demon. A fierce battle took place and every time the demon was wounded and his blood dropped on the ground, thousands of demons of his type would be created, thus making the task of killing him near impossible. The battle only got fiercer. Goddess Durga was angry and from her anger and deep concentration was born Goddess Kali. Kali in her fierce form eliminated the huge army and swallowed all of them, which left Raktabija all alone. She then struck the demon and before his blood spilt on the ground, she stretched her huge tongue and devoured all the blood ensuring that not a drop fell on the ground. This way, Raktabija was drained of all the blood and life and soon he was nothing but a corpse.
The myth has its own symbolism, which I will leave for the time being. Let us look at a modern incident and see if we have a solution the way Goddess Durga had.
Once upon a time, there was a country whose citizens were happy (well, somewhat). A demon named ‘religious tolerance’ started growing from small to big and the nation gave it the boon of secularism and long-drawn judicial system. Soon the demon started multiplying to the effect that one day; it became so big that the nation could not handle the numerous outfits which fired at its own citizens from all over the country. One fine evening, the demon and his army attacked one of the key cities and killed and maimed many innocent citizens. The forces of the nation put up a brave fight and managed to kill majority of them and captured one of the demons.
The system tried the demon for his crimes and declared him guilty after an unnecessarily prolonged trial, which was the result of a ‘thriving modern democracy’. Unlike Raktabija, this demon is still alive and taken care of by the same forces that had once set out to eliminate him. The nation is paying crores from the taxes of the hard- (and hardly)-earned money of its inflation-ridden citizens, the same citizens that the demon tried to kill.
Today, there is no Goddess Durga who can wage a battle and there is no Goddess Kali who can eliminate such demons. May be that is why Raktabija is now alive in the guise of Ajmal Kasab.
Today is 26/11 and three years back this demon had wreaked havoc on Mumbai city.
Mother Kali – where art thou?
Posted by This is Utkarsh speaking at 9:35 AM No comments:

Mata Tanot Rai Temple
Last time we discussed about the temple of Ghantiali Mata. We now move further.
Another 10 Kms from the temple of Ghantiali Mata, is a major tourist attraction, the temple of Mata Tanot Rai. Tanot is a small town which is about 120 Kms from Jaisalmer and is very close to the Indo-Pak Border.
The myths associated with the goddess are many, but we will start at the very beginning. The original and one of the first ones is associated with the self-immolation of Sati on the insult of her husband Shiva. It is said that Shiva had suggested that Sati not visit her father for a Yagna he had hosted and not invited both Sati and Shiva. But Sati did go and on feeling insulted, had thrown herself in the fire of the Yagna. When Shiva came to know about it, he was very upset with the ganas (Charans) he had sent along with Sati for not being able to protect his wife. In his anger he cursed them that they would not go back to heavens with him, and thus deprived them of immortality and the status. The Charans pleaded but Shiva would not hear of it. The Charans then fell on the feet of the dead Sati and started lamenting. A voice came from the dead body of Sati which said that the curse of Lord Shiva had to be borne; however, since it was she who was responsible for their condition, she said that whenever she would be born as a human, she would take birth in the Charan community only. It is said that due to the blessings of Sati, there were numerous births of Sati in the Charan community and there are many minor myths and miracles credited to the goddess. Thereafter the Charans were also referred to as ‘devi-putra’, sons of the goddess.
Later, Shiva took the dead body of Sati and went berserk in his pain and sorrow. Lord Vishnu had no option but to send his sudarshan-chakra, the discus, to sever the body into different pieces. As is well known that a religious site came up in all the places where a part of the body fell. In this region fell Sati’s head, and the place is known as Hinglaj. After Partition, this place now falls in the Balochistan province of Pakistan and the Charan community has converted to Muslim in due course of time. The present temple premises of Tanot Rai Mata is considered to be an extension of the main Shakti-peeth at Hinglaj.

The region is full of small myths associated with different births of Tanot Mata and numerous miracles are associated with the goddess, which is quite a norm associated with any divinity. However, the goddess Tanot Mata has modern day miracles associated with her too.
It is said that during the 1965 Indo-Pak war, the Pakistani troops were very close to the temple premises. The Pakistani forces had fired more than 3000 bombs and nearly 450 of them were targeted at the temple. But it was nothing short of a miracle that none of them exploded! Some of the shells have been kept in the temple premises as done in museums (see picture). The temple is close to Longewala, the Indo-Pak border and after the war, the temple was handed over to the Border Security Force (BSF) which till date manages the temple. The BSF has erected a memorial in the temple premises.
The temple has become better known to people outside Rajasthan after it was shown in the Hindi movie “Border”.
Though the locals have their faith and belief in the goddess, the name and fame of the temple and the goddess is thanks to its historical association. No matter what science tells us and teaches us, our emotions are kindled when we hear about the Pak firing and the unexploded shells. It’s more of a tourist attraction than a place of religious sanctity. Also, the myths associated with Hinglaj are a mere association as this is not a Shakti-peeth, but the texts and books available there have mentioned the temple’s ‘association’ with the famous Shakti-peeth which now falls in Pakistan.
The last two temples (i.e. Ghantiali Mata and Tanot Mata) are religious places but have historical association. This is found across the country and many places where some aspect of the divinity shakes hand with history – creating an air of reality which is both believable and assignable to a current date. Is this done out of a purpose or just gets associated due to an accidental occurrence, is tough to prove. But the fact that the association lends credence to the sanctity cannot be undermined.
Even in Greek Mythology, scholars trace the Trojan War to history, but at the same time it has numerous references of gods and goddesses participating in the war.
Finally is it history adding to the truthfulness of mythology or is it mythology lending a religious credence to historical events, is a matter of debate.
Next we will go through one more example of mythology during historical times, but with a difference. The myths do not incite communal tensions, rather promotes communal harmony. Keep reading.

Posted by This is Utkarsh speaking at 9:18 AM No comments:

Ghantiali Mata
During a recent visit to Rajasthan, we came across a few temples which seemed to be well-known locally and besides its religious relevance it seemed to have some historic relevance too. The idea of mythology and history shaking hands got me interested and we decided to visit the temples. Today we will discuss the first temple and its historic relevance. 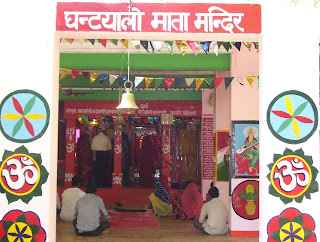