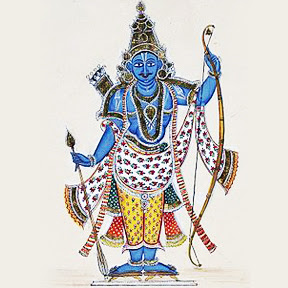 The Dasaratha Jataka  (DJ) is a version of Ramayana, which is quit distinct from the Valmiki version of the epic. It relates the story of King Dasaratha of Benares, his sons, Rama and Lakkhana, their sister, Sita, and half-brother, Bharata. There is no Shatrughna.
King Dasaratha has three children by his chief queen: Rama, Lakkhana and Sita. The chief queen dies and is superseded by a queen who bears a son called Bharata. At this the king is so pleased that he promises to grant her a wish. Soon the queen decides to check if the King was serious about his wish. When Bharata is seven, she asks that he be made king. Horrified, Dasaratha refuses. But the Queen persists. The King grew worried at thought that his queen was a treacherous woman, and if the children of his first wife, remained at the palace, she might cause them harm; maybe even murder. So he calls the three siblings and advises them to go into exile for their own safety. They should return when he died and take over the throne, he says.
Sita decides to accompany her brothers. The three settled in a hermitage in the Himalayas. Lakkhana and Sita decide they go about with the task of gathering food for the three of them, as Rama was the eldest. The soothsayers had predicted that the King would live for twelve more years. The soothsayers had predicted that the King would live for twelve more years. But King Dasaratha was so upset with the absence of his children that he died after nine years, not twelve.
On his death Bharata went with the army to fetch Rama back. They camped near the spot, and with just a few ministers entered the hermitage at a time when Lakkhana and Sita had gone into the jungle. Rama was sitting by the entrance, fearless and at ease, like a well set up golden image. Bharata went up and greeted him, stood to one side, and told him the news of the king. He and his ministers fell at Rama’s feet and wept.
Rama neither grieved nor wept; his senses were not even disturbed. When Bharata had wept and sat down, in the evening the other two arrived with roots and fruit. Rama thought, that Lakkhana and Sita were young and lacked his power of comprehension. If they were told of their father’s death, they might not be able to bear the grief and their hearts may burst. He decided that he would break the news to them gently.
He indicated to a pond and said, ‘You are late. Your punishment is to go into the water and stay there.’ They did so, and Rama said that Bharata had brought the sad news of the death of their father, King Dasaratha. At this they fainted. Twice more he tells them, twice more they faint. Then he took them out of the water. Once they were comforted, all of them wept again, except Rama.
Bharata then asked Rama why he is not grieving and Rama gives him the following explanation –
“When man can never keep a thing, though loudly he may cry,
Why should a wise intelligence torment itself thereby?
“The young in years, the older grown, the fool, and eke the wise,
For rich, for poor one end is sure: each man among them dies.
As sure as for the ripened fruit there comes the fear of fall,
So surely comes the fear of death to mortals one and all.
“Who in the morning light are seen by evening oft are gone,
And seen at evening time, is gone by morning many a one.
“If to a fool infatuate a blessing could accrue
When he torments himself with tears, the wise this same would do.
“By this tormenting of himself he waxes thin and pale;
This cannot bring the dead to life, and nothing tears avail.
“Even as a blazing house may be put out with water, so
The strong, the wise, the intelligent, who well the scriptures know,
Scatter their grief like cotton when the stormy winds do blow.
“One mortal dies—to kindred ties born is another straight:
Each creature’s bliss dependent is on ties associate.
“The strong man therefore, skilled in sacred text,
Keen-contemplating this world and the next,
Knowing their nature, not by any grief,
However great, in mind and heart is vext.
“So to my kindred I will give, them will I keep and feed,
All that remain I will maintain: such is the wise man’s deed.”
Rama explained the concept of ‘impermanence’ of things through the words.
After that Rama said that his exile had three more years to run, but gave Bharata his straw sandals to rule in his stead. Bharata returned with Lakkhana and Sita. The sandals were put on the throne when the ministers give judgment, and if the judgment was wrong they clapped together, if it was right they stayed quiet. After three years Rama returned home; he married Sita and ruled for sixteen thousand years. The whole point being made in this version is that Rama is the Bodhisattva, and as such gives an object lesson in controlling one’s feelings. From the Buddhist point of view the kernel is reached with the second verse, when Bharata asks: “Rama, by what power do you not grieve at what is grievous? You hear that father is dead but sorrow does not overcome you.” This is most unlike the Rama of the Ramayana, who faints at the news and then laments at length. He acts in accord with Hindu values. The author of the DJ is criticizing those values and saying, “Our idea of a hero is that he acts like this.”
This version however, does not proceed to take on the epic proportions that the Valmiki version does. There is no kidnapping and therefore no Ravana, Hanuman, et al.

Posted by This is Utkarsh speaking at 12:04 PM No comments: