On the eve of the ten day Ganesha festival, I found that I have written quite a bit in my earlier blogs on Ganesha and different stories related to him. That left me with very little on write on him, till I came across and interesting aspect of Ganesha, i.e. the female Ganesha, variously referred to as Vinayaki, Ganeshani, Vighneshwari, etc. all taken from the male names of Ganesha.

There are different versions to this and let us try to understand them and the concept behind it.


A simplistic explanation of this could be from the goddess Malini, the elephant headed goddess. According to some versions, Malini had drunk the bathwater of Parvati, and given birth to a five-headed elephant child, which was claimed by Parvati to be her child. Later, Shiva intervened and severed four heads to make it Ganapati and declared the child to be that of Parvati. Some versions say that though given birth by Parvati, Ganesha was nursed by Malini, and thus the female version is none but a more deified version of Malini.


Another interesting version says that once an asura named Andhaka, tried to take Parvati by force to make her his wife. When Parvati cried for help, Shiva appeared and struck him with his trident. However, Andhaka had a boon that from every drop of blood spilt on the ground another Andhaka would be created. Parvati then invoked all the forms of shakti of all the gods. So, on her calling, Indrani (of Indra), Vaishnavi (of Vishnu), Brahmani (of Brahma) etc. turned up and absorbed all the blood before it touched the ground. Finally, it was left on Vinayaki (the shakti of Ganesha) to drink up the entire blood, which killed Andhaka. This act is acknowledged in the form of Vinayaki Chaturthi, celebrated on the fourth day after the new moon, i.e. Shukla Paksha, of every month as per the Hindu calendar.


The principle of shakti is one of the most common explanation given for the female form of Ganesha. This however should not be seen as his wife/s, as is prevalent in the other forms of shakti of the other gods, as Ganesha’s wives all go with different names (for more, read http://utkarshspeak.blogspot.in/2010/09/ganesh-marriage.html ; http://utkarshspeak.blogspot.in/2013/10/kala-bou-or-banana-bride.html ;).


This female form seems to have gained prominence with the rise of the tantric sect around the 16th century. This sect believed that the female form represented the reproductive powers which enabled the perpetuation and nurturing of life, while the male form was responsible for implanting of the life only. Thus according to these followers, the power to generate was more venerable and thus they worshiped the female avatar of Ganesha as against the more popular male version.

Another theory says that Vinayaki is part of the 64 Yoginis, (Chausath Yogini) or a part of the sapta-matrika, the seven-mothers. The presence of such sculptures in the Yogini temples of Bhedaghat (Madhya Pradesh), Giryek (Bihar), Ranipur Jharial (Orissa), and some such temples in Karnataka, Maharashtra, Tamil Nadu and even Sri Lanka, only lends credence to the female form being a part of the Yogini cult.

The representation of Vinayaki or Ganeshi is similar to the popular forms of Ganesha, however the presence of breasts and the lack of tusks are the major differentiators.  A few are also shown her wearing a red saree, giving it a distinct female look.


Next, we will look at another unusual form/representation of Ganesha! Till then, keep reading…….

Posted by This is Utkarsh speaking at 6:13 AM No comments:


On the occasion of Janamashtami, the birthday of Krishna, I would like to discuss an important allegation leveled against him in the epic Mahabharata. These views are not subjective opinion shrouded in devotion; rather, these are objective views of a rank rational, if there was one! 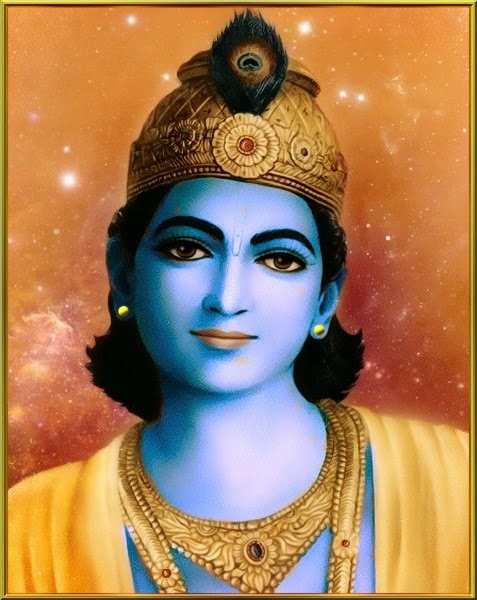 In the epic, Mahabharat (Mb), the deaths of Bhishma, Drona and Karna are all seen as acts of treachery by Krishna. The perception is that these deaths were unethical and against all norms of war and also the fact that none of the Pandava’s wanted to kill them under the said circumstances. They were made to resort to such unethical means at the behest of Krishna.

Was this fair? Was it moral? Was it ethical?

To put this in perspective, Mb was not about right or wrong or black and white, instead, it teaches that life is grey. Defining the grey is not easy because it is deeply rooted to the context. Every character has a shade of grey and that is what makes him or her closer to a human being. S/he was a combination of strengths and weaknesses and thus consequences.

While the said deaths are seen as injustices in the particular episode of the war, one should also see it along with the innumerable injustices meted out on the Pandavas that had taken place before the Kurukshetra, like the incident of lakshagraha, malpractices in the dice game leading to exile and that too with unfavourable conditions, Draupadi’s insult, not giving the Promised Land after 13 years, to mention some of them. The lives of the Pandavs had been spent more in jungles than the palace which was their rightful home. The war itself was not of equals – the Kauravas had a much bigger army, than that of the Pandavs. However, the deaths of the heroes were not to be seen as a tit-for-tat justice system.

Bhishma was myopic in his ‘serving the throne’. The focus on saving the throne was so strong that he could not see anything beyond it. He had a very myopic definition of his existence and a life whose virtues had serious ramifications, which in the larger interest were being misused by the perpetrators of evil. Drona was guided by first an initial enmity with Drupad and then the future of his son. Both were personal agendas, and he did not have any serious affinity for either the Kauravs or Pandavs. A teacher of his stature who had much in his power and capabilities was unfortunately driven by narrow considerations of life. Karna, a hero in the truest sense of the word, was a misplaced hero. His entire life was a quest for recognition, which made him fall slave to a person who had nothing right on his side. His need to repay debts was so strong that it became his sole objective of life.

Were any of these heroes fighting a war of ethics and morals and was their objective to fight a just war, when all in their hearts knew that the cause of the war itself was flawed? What significant efforts were made by each one of them to avoid or stop the war, especially when each one of them was in his own way strong and could have insisted on stopping the war, by just not willing to participate in the war?

Pandavs needed justice to regain all they had lost, after paying a heavy price for their mistakes and Krishna was guided here by the consideration of dharma which had been taken to a different dimension altogether. In the accepted interpretation, the ethics of the emergency situation notwithstanding, truth was by and large given an unconditional status. Krishna’s major motivation was to establish a sense of dharma and satya in the world to come. Did Krishna resort to indulging in ‘lies’ (as many call it) anywhere in the epic except in the specific case of Kurukshetra? Nowhere has Krishna advocated duty for the sake of duty, not without consequential consideration, though certainly without selfish motives. If efforts to establish dharma and satya were selfish motives then he surely had been selfish, lied and committed injustice. But ponder here – never has a lie been uttered anywhere. What was uttered was untruth. Lies are spoken with selfish motives, but an untruth need not have selfish motives.

Here I am reminded of an episode from American Civil War. When General Sherman had decided to burn down Atlanta, his Commander was shocked and wrote to him to stop it. The General is supposed to have told his Commander, “War is cruelty and you cannot refine it”. According to him a war has its own logic and momentum once it begins. It inevitably escalates, and you cannot blame the soldiers and generals for the killing, sometimes mindless. You can only blame those who started it.1 Nothing could be different in Kurukshetra too!

A close look of the epic will reveal that an austere and an unforgiving streak of dharma appeared to run through the epic. If good people are not allowed to win by any means, and if they had to fight justly, then one must be prepared to face the fact that they might lose. There was no guarantee that truth and goodness would prevail in human history. The Pandavas then would have had to accept this and wait, for another day. The outcome of the entire world would have been so different if the most important thing then was to just fight fairly. Since they did not and fought the way they did, they failed in their individual dharma, but managed to uphold dharma at large.

Needless to say that they were punished too with none of them allowed to ‘live happily ever after’. Even Krishna and his community faced elimination and died a bitter death. A big price to pay on the part of the Pandava’s and Krishna for eliminating all that stood for wrong and erroneous and establish the rule of the right and just.

What do you think?

1 – The Difficulty of Being Good – By Gurcharan Das


Image courtesy - http://www.stephen-knapp.com/krishna_print_onehundredsixtyseven.htm
Posted by This is Utkarsh speaking at 5:35 AM No comments: