The recent nature’s fury in Uttarakhand and the destruction in its aftermath are of mythical proportions. It is aptly called ‘nature’s fury’, as it does seem to be anger of nature or the gods. 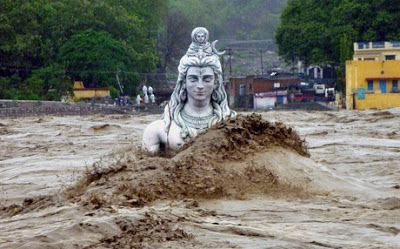 Mythology has mention of nature’s fury in terms of floods which had decimated mankind, save a few chosen ones. All the mythologies, be it Hindu, Christian, Greek, Babylonian, Mayan, or even tribal myths, are replete with myths which mention the end of the world brought due to massive flow of waters from the skies. It is said there are close to 500 variants of the same myth, which has a common thread running through them, collectively referred to as Flood Myths or Myths of Destruction.


God created the universe and its inhabitants, humans, animals, plants, etc. But humans had started to disregard God and His importance, and had also become wicked and greedy. Man had also stopped following the laws framed by God for them. This angered God and He decided to destroy all that He so painstakingly had created. However, God chose one person, who was good and noble. Different mythologies have different names for him, be it Noah, or Manu, or Utnapishtim or Deucalion. God asked him to create an ark which should be big enough to house all of what God wanted him to take along with him. Once done, there was a huge downpour, which took along with it, everything that was there on earth.


The ark created by God’s chosen one, is saved by God, which floats for sometime till it drops anchor on a mountain. After the waters recede, the chosen one, comes out of the ark, offers sacrifice to the gods and starts afresh, as directed by the gods.


The above is more or less the common thread in all the myths related to the fatal flood inflicted on humanity by God. The reason? Gods unhappiness with mankind.


The chosen one’s promise was that man would never waver from the ways of God and would never do anything to anger Him again, having witnessed the wrath of God. Accepting man’s promise, God too is supposed to have promised that He would never unleash such destruction again. As a seal of His promise, God created the rainbow, which according to the Biblical traditions, is also referred to as the Arc of Covenant, or the arc depicting Gods promise. 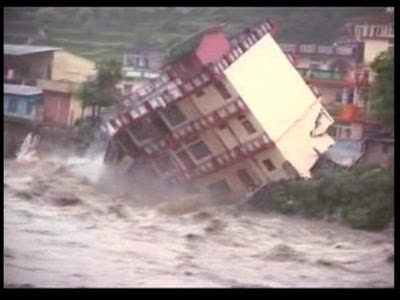 Seeing the scale of destruction in Uttarakhand, it seems like God has decided to break his promise. Why else would he unleash such fury, which has decimated towns and villages and wreak havoc of mythical proportions? Not only were humans killed, but even plants and animals, which probably didn’t even get a chance to complain. Ironically, even people who had gone for pilgrimage were not spared. Was anger on pilgrims fair? Should God have wreaked such havoc on people who had come to Him and seek His blessings? Should God have done this to children who were probably just born or those who had not even been initiated to the ways of the world forget about crimes. 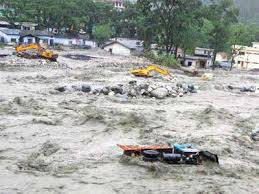 Just why was God so cruel and what was He avenging?


But if I am to apply my limited sense, I can see numerous reasons for God to be angry with mankind. God must be upset, for destroying the forest cover that he so carefully had created. He must be upset for eliminating all the animals and the foliage that he had created ages back to reside in the same. God must be angry for illegal mining of his land, or illegal construction over his land. He must be angry at the exploitation of his beautiful land for all the wrong reasons by all the wrong people, who are in charge of administrating His laws. Modernity has made changes in such laws, and with changing times, changes have to be brought in, but they still can’t be overruling the laws of nature and if man thought that he can get over by such overruling, then this act should bring man back to the ground.


However chilling and disturbing this act of nature’s fury be, if we don’t wake up and mend out developmental ways, we can expect some more.

Pics courtesy - Internet
Posted by This is Utkarsh speaking at 8:49 AM