A time to question ourselves

Suddenly everything is crumbling, crumbling to pieces; friends, relationships, faith, and belief. It’s time to question if one is wrong or the world is getting close to what should be seen as wrong.

There was a time when debates on politics and religion were different subjects and every debate ended in just disagreements on the subject. Now they often end in acrimony and enmity. Friends, who grew up arguing over a single cigarette or endless cups of tea, are unable to co-exist in a single group.

There was a time when opinions were sought, sought from people as one would want to learn from them. Now opinions are hurled at you. The objective of opinion is no more just to share one's views, but force one to think in a particular way.

There was a time when religion was mentioned only when one had to tick it in a box in some soon-to-be-shelved form. Now it is worn on one's sleeve, and with misplaced pride. A pride that allows one to look down upon every other religion.

There was a time when our national heroes were hailed for their contribution and shaping the nation that we are living in. Today, it is common to find children who barely manage to learn the spelling of History, criticize them. The contributions are long forgotten and a hero is dictated by one's regional and religious affinity.

There was a time when the word secular was a badge of honour amongst nations and meant a distance from religions. One could practice secularism outside one's home and follow one's religion inside and there was never a conflict. Now, the word is an abuse and misspelled on purpose – sickular.

New words have come to be followed in one's daily parlance – libtart, presstitute, troll, naxal, pseudo-secular, and people don't hesitate to use them, as these words divide the nation into two – the us vs them.

Social media today is used for the most unsocial activity. It is no more a voice for the voiceless but provides a license to silence and bully. People abuse, criticize, and opinionate with an élan never seen before. This is one place where anonymity and attention often join hands, however contradictory this sounds.

On the eve of Independence Day, it’s time to question oneself –

To celebrate or to introspect, is up to you! 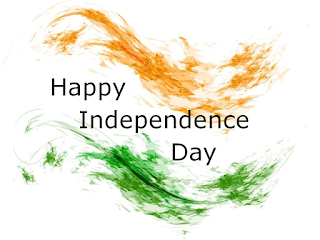 Posted by This is Utkarsh speaking at 5:55 AM