Diwali as we all know is a festival of lights. A festival which has its religious ceremonies, but is also marked by festivities, which involves, food, new dresses, rangolis (This is Utkarsh Speaking: Rangoli), illuminating homes and bursting crackers. However curiously, it also marks the legitimacy of gambling. On the night of Diwali, tradition has it that gambling is a must and young and old, all sit together to gamble. 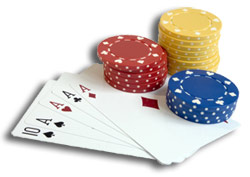 Where do we look at, to find clues, but mythology?

Though not much is found as a clue, there is but one instance of Goddess Parvati playing dice with Lord Shiva on the night of Diwali. According to this myth, on this night, Lord Shiva and Parvati played the game of dice and Shiva lost, then son Kartikeya played and defeated Parvati. After this Ganesha played with Kartikeya and defeated him. Since then gambling on this day is considered to be a family past time and one day, when this is acceptable. Some legends also mention that Parvati was cheating during the game and Shiva is supposed to have caught her hand when he found her cheating. This famous episode from mythology has been beautifully carved in one of the caves of Ellora, India, shown below – 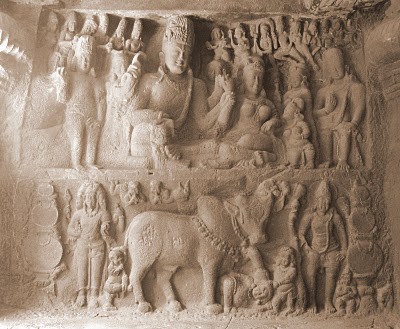 According to the legend, Parvati is supposed to said, that anybody who does not gamble on the night of Diwali, would be born as a donkey in his/her next birth!

I find this practice and its association with the legend nothing but a contradiction. Diwali is traditionally a day when we worship wealth in the form of Goddess Lakshmi. This is a day when you light diyas and illuminate your homes to enable the goddess to spot your house and step into it, thus ushering in a year of prosperity. Gambling away wealth on this day is a contradiction of sorts. How does one justify such flimsy usage (or misuse?) of wealth and that too on this day? Wouldn’t it be dangerous to spite her by ensuring that you gamble ‘her’ on this day?

Some have taken a high moral ground, by giving a philosophical interpretation to it. According to this school of thought, gambling on this day is to test one’s sense of control. One’s ability to keep dice as dice and not change it to a vice is being tested on this day. Sounds good, but just another justification for indulging in a vice, which is known for bringing down empires and the worst in mankind, and one doesn’t need to go far, mythology itself has a few obvious examples, the epic Mahabharata for one. Also, the myth referring to Shiva-Parvati playing dice does not mention anything about stakes, so justifying gambling of wealth is thus out of place.

Diwali is a festival which has lots to celebrate about. Let’s all do it with the right spirit. Wealth is an important but temporary resource, and it pays to value it. Hindus are probably the only community which worships wealth, and this is done out of respect for it as against a crass display of materialism. I don’t think we should look for false pretexts to abuse it. A vice is a vice is a vice and there can be no two ways about it. Needless to say, that Lakshmi, is also known as ‘chanchala’ or the restless-one – I would rather find ways to make her stay at my place for ever, than allow her to leave me by disrespecting her!!

My views on gambling are not didactic in nature, but to take recourse to mythology to justify such actions is quite unfair. Gambling, per se, is an act of individual choice, but keep it that way. Don’t look for vague justifications!

Enjoy your Diwali, and take good care of the Goddess Lakshmi and don’t bet on her!!

Posted by This is Utkarsh speaking at 10:45 AM