Do you know why snakes have forked tongues? 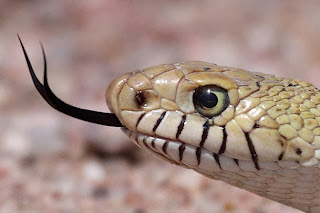 Sage Kashyap had two wives, Kadru and Vinata. Kadru was the mother of the nag’s or snakes and Vinata was the mother of Aruna (who became Sun’s charioteer) and Garuda, one with a body of a man and face and wings of an eagle, who was also the vahana of Lord Vishnu.

Once the two sisters had wagered on whether Indra’s horse was all white or not. While Vinata said that it was completely white, Kadru maintained that it had a black tail. The loser of the wager would be the servant of the winner. The next day in the sunlight, they checked and noticed that the horse indeed had a black tail. However what was not known to Vinata was that Kadru had asked some of her children to wrap themselves around the tail of the horse to make it look black. As per the condition, Vinata became Kadru’s servant and she had to undergo trials and a hard life.

When Garuda grew up, he too had to do menials for the children of Kadru. Once Garuda decided to end this subservience and asked the children of Vinata the price for releasing his mother of servitude. The children asked for nectar from the heavens, which was nothing but impossible.

After many twists and turns, Garuda managed to steal the pot of nectar from Lord Indra’s custody. However, Indra managed to convince Garuda that the nectar was not meant for the nag’s, as that would immortalise them, which would be against the laws of nature. Garuda reasoned that he had undertaken the adventure and risked his life to release his mother of a life of servitude and he would not care beyond that.

Later, Garuda relented and suggested to Indra and that he would hand the pot to them and seek his mother’s release and after which he could steal the pot from them. As agreed, Garuda handed over the pot of the nectar and got his mother released. Just when they were about to consume the nectar, Garuda suggested that it might be a good idea to have a bath before consuming the food of the gods. The nags left the pot on the kusha grass and went for a bath in the river. Once Indra saw the pot on the grass, he picked it up and started to leave. The nags noticed Indra fleeing with the pot and they chased him. While fleeing, a few drops of the nectar fell from the pot on the kusha grass which is known for being sharp. The snakes didn’t want to miss out on whatever they got and so tried to lick the nectar from the grass, but got their tongues slit due to the sharp blades of the kusha grass.

Since then, the snakes are supposed to have forked tongues and since they had harassed Garuda’s mother all her life, the snakes became the natural enemies of the eagle too!
Posted by This is Utkarsh speaking at 9:40 AM