In the epic Mahabharata, the episode of Khandavprastha is one of the most important events with serious implications. It also one of the most complicated events that mark the birth of a kingdom, but not without raising a few questions. Let us understand the event better.

Once the Pandavs return with Draupadi after the Lakshagraha event, they get into trouble with the Kauravs and the differences lead to the partition of land, with Hastinapur being retained by the Kauravs and the land better known as Khandavprastha was given to the Pandavs. Khandavprastha, later renamed as Indraprastha, was a tract of land which was a dense jungle with rich flora and fauna. To establish a kingdom, it was inevitable to burn the forest down. However, what is surprising is that that not a single life was spared, be they animals, birds or the naga’s or serpents who used to reside there. It is said that all animals who tried to escape were killed by Arjun or Krishna, and thus all life perished either by fire or by weapons of the two. 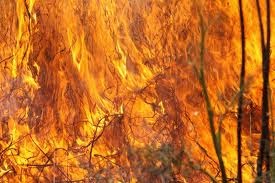 Just why was this kind of ‘mass-murder’ necessary? Couldn’t the animals and birds be allowed to leave? Wouldn’t that have been a better alternative instead of such naked bloodbath at the onset of the establishment of a kingdom?

According to the Khandava-daha Parva of Adi Parva (Section CCXXV) of the epic, there is an interesting myth which led to such actions by the two main characters of the epic. When Arjun and Krishna were contemplating the method of clearing the forest of Khandav, an old man came to them and told them that he needed help. He went on to say that he was a Brahmin, who was used to eating a lot of food and needed to be fed. When Arjun asked him the nature of the food that would suffice his hunger, he pointed them towards the forest.

This old man was none other than the Vedic deity, Agni. Agni them went on to related another myth. Once upon a time there lived King Swetaki, who was used to performing yagna’s for the welfare of his kingdom. His over-zealousness for such sacrifices made the sages run away from him out of sheer tiredness and the sore-eyes that they had developed due to being in front of the fire all the time. Not to give up, Swetaki approached Rudra to bail him out and Rudra asked him to approach Sage Durvasa (considered to be an ‘aspect’ of Rudra himself).

Rudra agreed to take up the sacrifices, provided Swetaki arranged for enough ghee, or clarified butter, to last twelve years at a stretch. When Swetaki arranged as directed, Sage Durvasa conducted the sacrifice. However, by consuming so much of ghee, Agni suffered from severe dyspepsia, to the extent that Agni stopped consuming anything for some time. Staying hungry for so long, Agni had now developed a huge appetite which could be satiated only by the Khandav forest and every inhabitant of the forest.

Arjun wanted to know why he couldn’t do it himself and why he needed their help. Agni continued that among the inhabitants of the forest were the nagas, the serpents and their King Takshak. The serpents were under protection of Lord Indra and every time he tried to consume the forest, Indra would send the rains and extinguish the flames. Agni wanted Arjun and Krishna to help him devour the entire forest to satiate his hunger.

The matter now gets complicated as Indra was also Arjun’s father, and would he take up arms against his father at the behest of Agni?

Arjun however agrees to fight it out, but would need celestial weapons. Agni gave him the Gandiva, the bow with quivers which never got depleted of arrows. Agni also gave Krishna the sudarshan-chakra, the weapon of Lord Vishnu (thus establishing Krishna as an avatar of Vishnu). Together Arjun and Krishna are also referred to as the mortal forms of the divine Nar and Narayan.

Soon, Agni lit a small fire and started to consume the forest. When Indra learnt about the fire, he sent his rain clouds. Arjun used his bow to create an impenetrable umbrella of arrows which stopped the rains. When Indra realized what was happening, he himself came down to fight it out but realized that he was no match for his son and Krishna together. Matters came to a standstill only after the entire forest was devoured without a single life escaping, except for Takshak who was not in the forest and his son and four saranga birds. Also, Maya Asura, the architect of the asura’s too managed to save his life in return of a promise of building a never-built-before palace for the Pandavs.
At the onset, I had mentioned that this was a complicated myth, as no life was spared in the mass fire, which is supposed to have lasted for fifteen days. All birds, animals and serpents perished in the fire, leading to a life-long enmity between the nagas and the Pandavs with serious repercussions in future.

According to Dr. Pradip Bhattacharya, this conflict brings out many interesting aspects. For one, this is a classic case of father-son conflict (Indra vs. Arjun) which is a common theme in mythologies of the world. It is also a classic case of a conflict between two elements of nature, fire and water. In modern terms, it also depicts the victory of man over nature. Iravati Karve, the author of Yuganta views this as the colonization of the Aryans, by sheer force and decimation of the natives. A number of weapons are introduced during this event, which could be an indication to the impending war.

The entire event displays a complex set of contradictions. The nagas venerated Indra, the god of gods who decides to side with them against his own son and other gods; Pandavs take the help of an asura to build their palace, instead of the celestial architect Vishwakarma; the palace of illusions by itself becomes a point of conflict later in the epic; all life perishes in the fire, except those mentioned earlier, and yet it is not a crime.

While the myth of Agni’s hunger could be seen as a justification of the event, it also helped absolve Arjun and Krishna of the crime of mass-murder as they were doing it at the behest of a Brahmin!

Banteay Srei Pics courtesy Wikipedia
Posted by This is Utkarsh speaking at 9:14 AM