Mahabharata in Kerala too has its regional version and some aspects are a far cry from the original. What is interesting is that some of the episodes are part of the present day enactment in a number of dance forms of Kerala like the Kathakali, Theyyam, etc. While, I must add that the entire version is worth reading as it is extremely colourful and interesting, we will focus on only one aspect of the difference from the original text by Vyasa, and that is the act of Nilalkkuttu or shadow-piercing by abhicara, i.e. use of black magic. At the onset, let me thank both Mr. A. Purushothaman and Mr. A. Harindranath, who have been studying this aspect very closely, for sharing details with me on the subject as well as allowing me to use photographs from their personal collection. 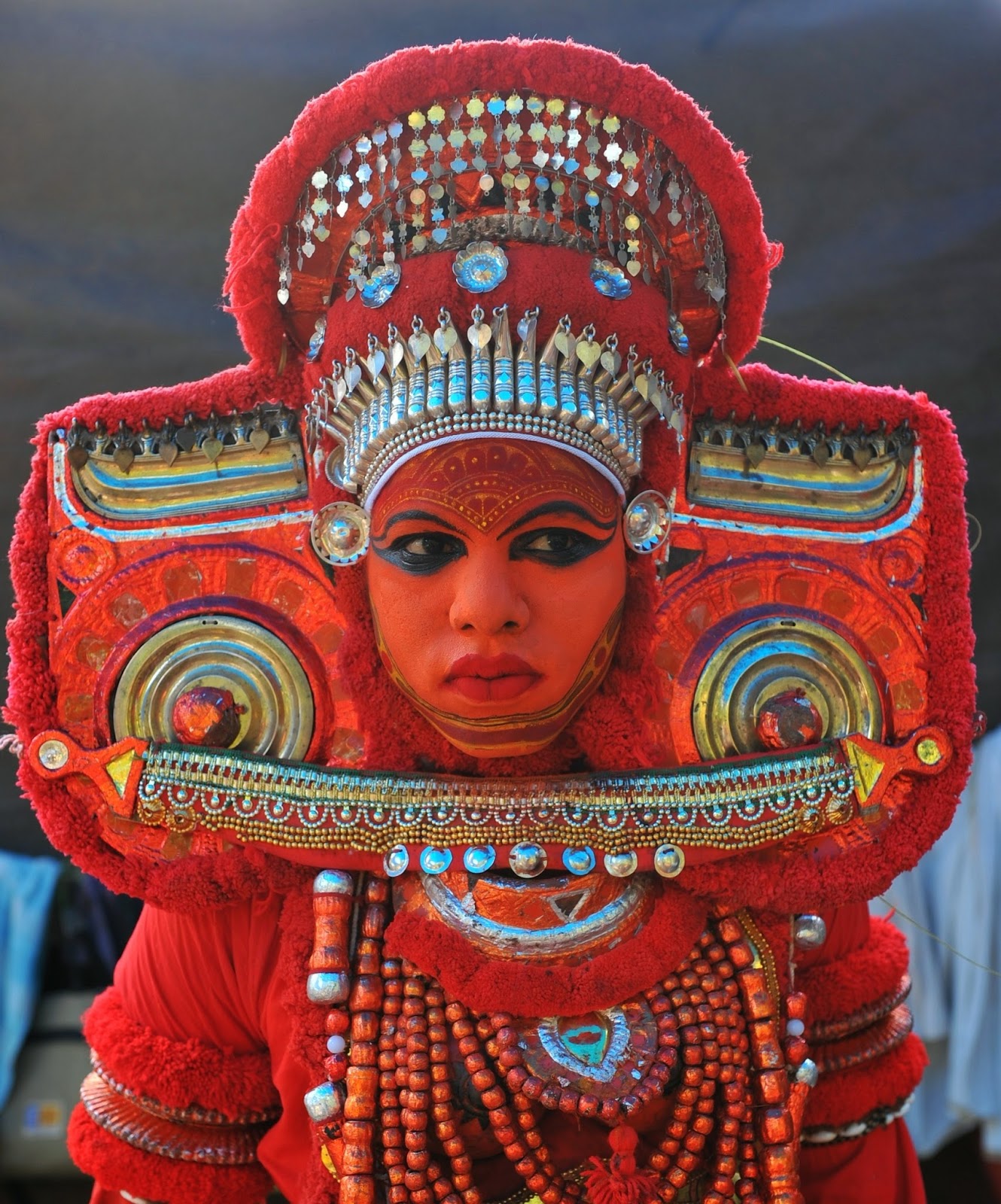 While there are different versions of abhicara in different versions of the Malayalam Mahabharat, we will only discuss a couple of them, which are till date enacted in different dance forms across the state, besides being a part of certain rituals in some temples in Kerala. While there are some common elements amongst the different versions, the difference does make interesting reading. It is important to mention here that the rituals that are performed as part of the ritual enactment of the myths from the epic, are generally enacted by Malayas, Velas, Mavilas, Koppalas, and Pulayas, etc. who are part of the aboriginal groups of Kerala and the adjoining regions.


We will not go into the details of the ritual enactment, but will focus on the legends behind the rituals. One of the legends says that the Pallippana was first performed by Lord Shiva. Once due to excessive work pressure, Lord Vishnu fell unconscious. Subramanya, the god of Astrology, suggested that Pallippana be performed to revive and rejuvenate Vishnu and same had to be done by a Velan. The world was searched for a Velan but none could be found. It was then that Lord Shiva took the form of a Velan and Parvathi as the Velathi and performed the first Pallippana and revived Lord Vishnu.


In the ritual of Pallippana, the Muroattu is more important which is performed by the Velathis. The legend behind this is as follows –


Bharata Malayi a servant of the Pandavas was worried that her husband, Bharata Malayan was gone for too long and had not returned home. She decides to step out along with her son to look for her husband. On the way, she sees him coming with a large bundle which was full of gifts. When Malayi enquired about the gifts, he said that he had got the gifts from his masters (Kauravas) who had got together with her masters (Pandavas) for a hunt. Malayi not satisfied with the answer, further inquired if there was any death in the ritual, to which he replied that five stags and two deer were killed.


Malayi immediately understood that her husband had shadow-pierced the five Pandavs along with Kunti and Draupadi. She was angry with him as he had earlier pledged to her that he would never harm the Pandavs, her masters and she to his masters and this pledge was broken by Malayan. Malayi insists on doing the counter abhicara to revive her masters. Malayan tried to dissuade her by showing her a diamond necklace which he had received as a gift. An angry Malayi threw it away. Their son also tried to dissuade her, which further infuriated Malayi, as she felt that the son was like the father. She killed their son in anger. She then recited the counter- abhicara mantras and invoked the gods.


The gods appeared and asked her what she wanted. Malayi asked for all those things that she needed to perform Pallippana, which were none other than the ones that Lord Shiva had used to perform the first Pallippana. The gods were pleased with her and gave her all the items that she had asked for, with the help of which Malayi revived the Pandavas and Draupadi and Kunti.


It is interesting to note that the entire performance is conducted by an aboriginal group and the main act is performed by the women. Here the woman is serving the righteous and also revives them when they were wrongfully killed by her husband in return for material gifts. She doesn’t even think twice before killing her own son, for taking the side of the wrong/evil. The first performance of the ritual having been done by Lord Shiva, lends a sense of credence and divinity to the later and modern day performers, even if they are an aboriginal group and probably marginalised in the modern times.


The Panthrandu Kalabham is performed every year to rid the idol of impurities and weakening of its powers with time and sometimes due to the rituals not performed in accordance to the laid down norms. A deity which is not powerful cannot shower effective blessings and such rituals enable the deity to regain its diminished or lost power.


Next we will go through a slightly different version on the above. Keep reading……
Posted by This is Utkarsh speaking at 9:36 AM