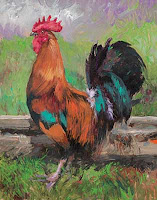 Some time back, I had written about Vahanas (see Post dated July 28, 2010). Amongst many of the Vahanas, the Rooster has quite a prominent place in not just Indian Mythology, but other mythologies too. Let us go through some of them, before understanding what it symbolises –

Indian
In Southern India in the Tamil folklore, a large, red, fighting rooster (kukkuta in Sanskrit) adorns Lord Murugan's flag, heralding the dawn of wisdom and the conquest of the forces of ignorance. It is said in Mahabharata, that the rooster also adorned Srikhandi’s flag during the war of Kurukshetra. The carrier of Goddess Bahucharaji is also a rooster.

Greek mythology
According to a Greek legend, Alectryon - the ancient Greek word for "rooster" - was a youth who was ordered by the Ares, the god of war, to stand guard outside his door while the he carried on an adulterous dalliance with goddess Aphrodite. Unfortunately, Alectryon fell asleep at his post, and Helios, the sun god, walked in on the amorous couple. Spitefully, Ares turned Alectryon into a rooster, which never forgets to announce the sun's arrival in the morning.

Bible
The Bible provides a well-known reference in the passage where Jesus prophesied of his betrayal by Peter: "And he said, I tell thee, Peter, the cock shall not crow this day, before thou shalt thrice deny that thou knowest me." (Luke 22:34) This made the rooster a symbol for both vigilance and betrayal.

Jewish legends
The Talmud speaks of learning "courtesy toward one's mate" from the rooster. This might refer to the fact that, when a rooster finds something good to eat, he calls his hens to eat first.

European Tale
In old central European folk tales the devil is believed to flee at the first crowing of a cock. A medieval myth posits that the Basilisk, a giant snake who kills with a single glance and is hatched by a toad from a hen's egg, will instantly die if it hears a rooster crowing.

Asian folklore
Historical documents from Koryo Kingdom (A.D. 918 - 1392) in Korea indicate that roosters were reared in the royal court for keeping time, as no clocks existed in that era. Travellers would take roosters with them on long trips to be woken on a timely basis.

China
In China the bird has traditionally been considered a good sign, as its crow meant the break of dawn and the beginning of a fresh start. It is also believed that ghosts and evil spirits afraid of the light vanish when a rooster crows. The five virtues attributed to the rooster in Chinese mythology are: knowledge, military expertise, courage, benevolence and credibility.

Rooster Symbolism –
A rooster represents male energy and possibly aggression. If one has ever observed a rooster in a hen-house, one would notice that the roosters are very aggressive, demanding and territorial. A rooster is seen as a virile bird and extremely productive. In the olden days, it was masculine to be in a position to be progeny-productive, irrespective of age and a rooster has a unique space amongst the birds/animals to be in that category.

Though the crowing of a rooster is considered to be a wake-up call as seen by the predominantly agrarian society, the symbolism associated with the crowing of a rooster is always that of a warning call. A call to say that light has spread and it is time for the darkness to recede. Darkness which is associated with evil has come to an end. It is time to begin the day in a new way and afresh. A roosters crowing heralds this new beginning each day bringing a new dawn in every listeners life.
Posted by This is Utkarsh speaking at 1:06 PM