The universal body art of tattoo seems to have its origin in Mythology.

According to one of the myths, Goddess Lakshmi told her husband Lord Vishnu that whenever he went out of Vaikuntha, she felt very scared. Vishnu immediately took his weapons and pressed them on her body leaving marks of the same, saying that the weapon-marks would guard against any evil. This is probably one of the the first reference of tattoo or body art in our mythology. 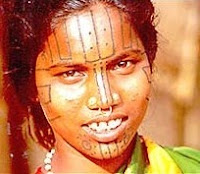 Besides this there are some references of tattooing in tribal mythology of our country. The Baiga tribes of Central India believe that tattooing was started so that people could take such designs with them to grave. The meaningless of such tattoos is for God to keep trying them as riddles! The Muria community did such designs as per the instructions of their goddess.

Another interesting myth is recited amongst the Gond tribes of Central India. According to this, once Mahadeo (a Shiva incarnate) invited all the gods for a feast. All the gods and goddesses were there, among who was also a Gond god. The Gond god was there to take his wife away from there, but amongst all the goddesses, he could not recognise his wife and by mistake he dragged Parvati (Mahadeo’s wife) from the gathering. Mahadeo knew it was a mistake and started laughing, but this angered Parvati to no end. She then decided that people of different castes should have distinct tattoos and since then, tattooing has become a must amongst the tribes of Central India.

Tribal tattoos have a distinct design, which sometimes does not mean much. However, over time, such meaningless forms have given way to signs and motifs commonly understood by people, like a trishul, or a swastika or an Om. The tribal’s who have converted to Christianity sport a cross. But majority of them still carry meaningless forms like dots, triangles, etc. which might not have any significant symbolism behind them. Also, the tattoos were not restricted on only arms and other parts as done today as a fashion. Amongst the Tribals today, the tattooing was all over the body, including on the faces.

Probably the only distinction between these tattoos and what we see today is that the tattoos of the tribal’s were not a fashion statement, but a norm or a custom. People followed them out of respect for their cultures. Besides serving the purpose of teasing god’s brains, it also served as a caste differentiator.
Posted by This is Utkarsh speaking at 9:47 AM

Email ThisBlogThis!Share to TwitterShare to FacebookShare to Pinterest
Labels: Tattoo