Demeter lived in the mountains and was known as the protector of the fields. She was known as the fair haired earth goddess who blesses all phases of the harvest. She walks the furrowed fields dressed in green.

Demeter had a very close bond with her daughter Persephone. Persephone was the goddess of the underworld, spring and harvest. She also represented all the elements of the earth.

After the disappearance of Persephone, Demeter began to look high and low for her daughter. Demeter was so distraught, that she wandered the earth for nine days, denying herself of all forms of food, drink and comfort. She renounced her divine functions as a goddess of vegetation and fruitfulness, in search of Persephone. 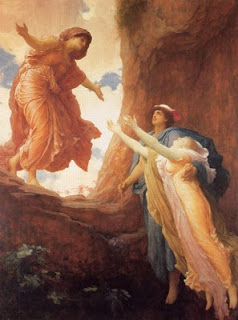 Seeing this Zeus decided to intervene. He sent his messenger to speak to Hades to release Persephone from the underworld. But as luck would have it, Persephone who had revolted all these days by not having anything to eat or drink and had just tasted a few seeds of Pomegranate and had thus become one of the underworlds, as per the rules of the underworld.

So a compromise had to be struck, that Persephone would spend two-thirds of the year with her mother, Demeter, and one-third as the queen of the underworld.

From that day onwards, while Persephone lives with Hades, the days are short and dark and cold. Demeter, who could not forgive Hades, allows the earth to go barren during the months when Persephone resides with him. But her return to earth is marked by the spring season when there is the warm, bright light of summer, and the flowers start to bloom, the leaves to bud and the birds to sing in the sky.

Herein lies the secret of seasons, explained so painfully through the love of a mother and daughter!

Posted by This is Utkarsh speaking at 5:57 PM