Today is Cheti Chand, the New Year for the Sindhi community and there is a very interesting myth on the origins of this day too. 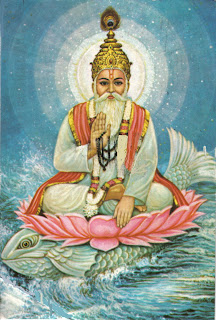 According to a myth, the Turkish invaders were imposing their might and right on the Hindu’s by forcing them to convert to Islam, in the region of the Sapta-sindhu, the land of seven rivers. Among them was a tyrannical Mirkshah who issued a dictate that all the Hindus should embrace Islam. The people of the region (Sindh, now in Pakistan) went to the banks of the river Sindhu and prayed continuously for forty days to the Lord of the oceans, Varuna (Varuna was a Vedic god). On the fortieth day, they heard a voice which said that the Lord would take a human form (avatar) and be born to one Ratanchand Lohana and his wife, Devaki, who would be their saviour. Soon a child was born to the Lohanas, who was named Uderolal (one who came from the waters). When the child was put in the cradle, the cradle started rocking by itself and thus he popularly came to be known as Jhulelal.
During his birth and thereafter while he was growing up, there are many stories that highlight a number of miracles performed by him. All these miracles only reinforced in the minds of the people and the rulers that this was no ordinary child. In due course of time Jhulelal and Mirkshah came face to face and Jhulelal managed to convince Mirkshah that who he called Allah was none other than who the Hindus called Ishwar and the twain was one. Mirkshah however did not give up till he was threatened by a miracle. It is said that when Jhulelal tried to convince him about the oneness of the religion, Mirkshah ordered the arrest of Jhulelal in the court. As soon as he did, waters gushed into the court drowning all and threatening to do the same to Mirkshah too. At the same time, there was fire all around. Mirkshah was surprised and scared to see what had just happened and begged for mercy. No sooner had he done that, the waters receded and the fire was extinguished.


After this, Jhulelal was worshipped by both the Hindus and the Muslims and it is said that on his death, to commemorate the site, a structure was built, one side of which is a Hindu Samadhi and the other side is a Muslim Dargah – a rare site of the unification or the oneness of the two religions. Cheti Chand is the birth day of Jhulelal, who has come to be known as the patron saint of the Sindhi’s and a messiah of communal harmony.


This is a very unique myth. Very rarely have we found a Vedic god associated with the myths and here we see the association of Varuna who has no significant counterpart in the Puranas. Also, history (the times, the invaders and the rulers can be traced back) has been merged with mythology. Jhulelal has been depicted as an old man sitting atop a ‘pala’ fish (a fish which swims against the tide, again symbolic of Jhulelal's going against the powers-that-be of the times). Since Jhulelal was considered to be the human form of Varuna, the depiction of fish (again a marine life) is not too far-fetched. Also since the civilization and the culture thrived on the banks of the Sindhu River, association of Lord Varuna can be explained. The popular depiction of Jhulelal being old and elderly could be to grant him a sense of acceptance amongst the people of the times as old was always associated with wisdom. Miracles were to grant him a divine status.


All in all, an interesting combination of history and mythology with a message of communal harmony. On this occassion, here's wishing all my Sindhi friends -
Cheti Chand jyon Lakh Lakh Wadayun Athav
Posted by This is Utkarsh speaking at 9:24 AM