Here is an interesting Greek myth which talks of Aphrodite’s infidelity.


Let me introduce the characters first –


Aphrodite – goddess of love and wife of Hephaestus; she is also known as Venus in Roman mythology


Hephaestus – the blacksmith of gods, also known as Vulcan in Roman mythology, (the word ‘volcano’ gets its name from Vulcan; the ancient Romans believed that a volcano occurred when Vulcan was working in his forge making thunderbolts and weapons for the gods)


Ares – the god of war also known as Mars in Roman mythology.


Aphrodite and Hephaestus did not have a happy married life as Aphrodite never liked the old and lame Hephaestus. From his end, Hephaestus was too busy with his craft and did not make any effort to work on the relationship. Ares was a handsome young man, and soon Aphrodite and Ares were meeting at Hephaestus’s home, in his absence.


During one such escapade, Helios, who is everywhere during the day, saw them on Hephaestus’ bed. He reported the matter to Hephaestus, who was angry. Hephaestus planned to catch them red-handed. Hephaestus made a fine invisible net of bronze and laid it on his bed. He left for his work soon after. When Ares saw him leaving, he immediately came to Aphrodite and both headed for the bed. No sooner had they gone to bed, both of them were ensnared in the invisible net, so much so, that they couldn’t even move.


On getting the message from Helios, Hephaestus came back and caught them in the act. He made a lot of noise and called all the gods and goddesses to come and see both of them. The goddesses were embarrassed by the act of Aphrodite and so they all stayed back, but the gods came and took voyeuristic pleasure in seeing both in the act, with not a shred of cloth on them. 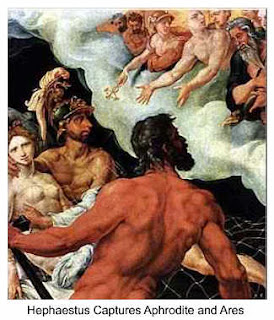 Some gods made fun of Hephaestus for making a marital issue public, while some envied Ares, while still others just laughed at the predicament. After much embarrassment, Poseidon, the god of seas, decided to mediate. He requested Hephaestus to let go of Ares after making him pay a fine for adultery. Poseidon even agreed to stand guarantee for the payment. Hephaestus released both of them and Ares immediately left the city. It is said that Aphrodite later gave birth to a child, who was named Harmonia (the origin of the word ‘Harmony’).


On the surface of it, the myth gives a moral message against infidelity, which I will skip as I am sure all the readers have understood it. Let me give you an insight into the symbolism of such myths.


According to some scholars, this was a comment on the art of blacksmithing -

Fire (i.e. Hephaestus) softens iron (i.e. Ares). In this work, as in any work, one needs to apply passion (i.e. Aphrodite). After the iron has been softened, one needs to use water (i.e. Poseidon) to cool it off. From this myth, one can surmise, that the essence of hot and dry and its opposite, i.e. the cold and wet, sometimes draw the universe together and sometimes pull it apart. When together, it gives birth to harmony. This is one of the most beautiful interpretations of an otherwise simple tale of infidelity.


Some scholars have gone ahead to say, that the union of Aphrodite and Ares amounts to adultery. According to them, the two are not naturally inclined to be together, and thus goes against the norm, but when together, produce harmony. Some scholars have interpreted the laughter of the gods too. According to them, the union of love and strife is a cause for joy, which is to be seen in the form of divine laughter as against the cynical as seen in the myth.


Whatever message one takes is on one’s own self, but one thing is for sure, the myth is pregnant with inherent symbolism!

Posted by This is Utkarsh speaking at 9:30 AM