In my last Blog, we read about the Devil or Satan in the Christian and Islamic mythologies. This does not mean that the Satan in some form or the other did not exist in any other mythologies or cultures. Let us look at Mara, the Satan in Buddhist mythology.


It would be pertinent to mention that Mara is not a permanent devilish character in Buddhist mythology. He presents himself at an important juncture and shows its presence and thereafter, Mara manifests itself in the form of temptation and other vices for mankind, which again is a common form of the Devil.


Mara seems to have tried to lure Buddha many times in different forms. The first time it tried when Gautam (who was not the Buddha then) was leaving the gates of his city after renouncing the world. Mara offered to make him the monarch of the entire universe if he changed his mind of renouncing the world, but Gautam did not heed and carried on his pursuit.


The next time we see Mara in a more determined and fuller form. Just before Gautam attained enlightenment, Mara was determined to break Gautam’s firm resolution. Mara decided to attack Gautam with his full army with him atop an elephant. Mara’s followers were armed with weapons and in frightening forms. They hurled their weapons, but the same turned into flowers and dropped on the ground. Next Mara sent whirlwinds and earthquakes, but nothing stirred Gautam. Seeing him frustrated his children asked him the cause of such worry. Mara explained that there was a frail man under the tree who had no weapons, no army, nothing, but still managed to threaten the mighty Mara with his resolution of attaining something. This could lead to his decimation, which he could not allow, but he seemed to be unable to make any difference. 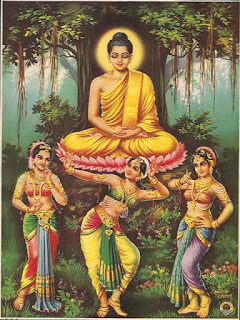 He then sent his three daughters to seduce Gautam and lead him into a world of temptation, but Gautam did not even feel their presence. As a final try, Mara claimed that the place that Gautam was sitting for his penance was his and Gautam should vacate the place immediately. As witness, Mara got his followers to echo his statement. Gautam had no witness to his claim, so he simply let his middle finger touch the ground, to which Mother earth roared back saying that she stood as a witness to Gautam’s right to the spot.


Seeing this, Mara knew that he had lost. However, not the one to give up easily, it is said that Mara called for rains to pour down heavily on Gautam. But the king of serpents who wanted Gautam to succeed came to his rescue. It coiled down under him to raise him above the mud and waters and spread its broad hood above Gautam to allow him to meditate. With this Mara knew that he had lost and he left the place with his followers.

It is said that Gautam was now at peace and his meditation continued for about forty-nine days, after which he attained enlightenment and he became the Buddha.


The concept of an evil being in mythology is a common factor. The intense clash with the devil or evil beings in mythology helps to refine the hero’s character and the glory at the end of it aids in the process of deification. In the case of Mara, he is personification of all the negative elements in human life, prime among them being temptation. According to Buddhists texts, Mara also means the end of spiritual life or spirituality.


In one of the texts detailing the above event, Mara’s army is said to consist of lust, hunger, thirst, craving, doubt, cowardice, etc. His three daughters who were sent to seduce Gautam had the ability to take different forms to lure and charm. Some texts have mentioned five daughters of Mara, whose names meant, attraction, aversion, delusion, pride and fear. Here Mara is nothing but the different temptations which lead man to all sorts of trouble.


Another interesting aspect of this myth is the support Buddha gets from the earth and the serpent, both of which are prominent Hindu deities. Many feel that the character of Mara was based on the Vedic demon, Namuci. This entire episode in the life of Buddha, blends well with the mythological tract of a hero’s clash with the evil, as well as blend with the Hindu elements of aid coming from other minor Hindu deities in the quest for enlightenment.


An interesting myth on the occasion of Buddha Purnima, today!

Posted by This is Utkarsh speaking at 9:49 AM