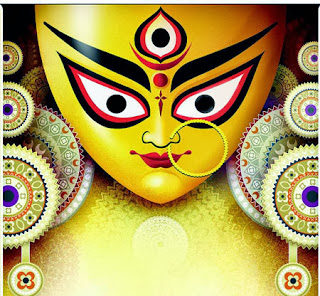 Durga Puja begins today and is an important festival in West Bengal and the Eastern parts of the country and the entire Bengal wears a festive look. People celebrate the festival with all the gaiety and revelry that goes along with it.


Durga Puja is the celebration of the killing of the Mahishasura (This is Utkarsh Speaking: Mahishasura ) who had become a threat to all the gods and humans and was invincible except by a woman, due to a boon. After a fierce battle, Goddess Durga kills the demon.


However, this festival initially did not take place at this time of the year. An interesting need-of-the-hour is the cause of the celebrations at this time.


According to the Bengali Ramayan by Kritibash, Goddess Durga was worshipped in the spring season (and thus Durga Puja was also referred as Basanti Puja, the festival in the spring season), and never in autumn. But after an inconclusive battle with Ravan for many days, the gods advised Lord Ram to propitiate Goddess Durga and seek her blessings. But Goddess Durga was never worshipped in autumn, and thus Ram’s propitiating the Goddess is referred to as Akal-bodhan, akal meaning out-of-turn or out-of-season and bodhan meaning worship or invocation. In due course of time, the region started celebrating Durga Puja during the autumn and thus the festival is also known as the sharad-utsav or the spring-festival.


According to the same version of Ramayan, Ram took the blessings of Durga on the sixth day (Sashti) i.e. today, and went into battle with Ravan on the seventh day (Saptami) and killed Ravan at Sandhikshana or during the crossover between the eighth (Ashtami) and the ninth (Nabami) day, and cremated on the tenth day (Bijoya dashami).


The worship of Durga by Ram too has an interesting legend. According to some versions, Ram was advised to worship the goddess as she was considered to be the patron deity of the land of Kuber, i.e. Lanka before Ravan usurped it from Kuber and it would be in order to seek her blessings before invading the island. It is said that Ram needed 108 ‘neel kamal’ or blue lotuses to offer the goddess Durga and after a lot of efforts managed to get only 107 of them. Ram was also referred to as ‘rajiv-nayan’ or the one with eyes like lotus, and since he could not arrange for one more to complete a hundred and eight, he offered his eye by trying to pierce it with an arrow, but the goddess appeared at the right moment and granted him the blessings of victory. Some versions say that Ram did manage to get all the required lotuses, but the goddess hid one to test his devotion. 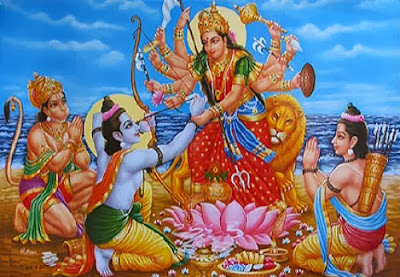 
It is interesting to see gods in their own right seeking blessings from goddesses prior to a battle. The cult of Mother Goddess was prevalent from the ancient times and Goddess Durga has always had a unique place in the pantheon. Though she is a goddess created by the gods to fight a demon, she does it without the direct help of any gods. She fights a relentless battle, till she eliminates the evil force, Mahishasura, who was threatening the universe and all the gods with his power. To sustain such a dominating feminine power, Shakti, it was imperative that the later puranic texts perpetuated her position of someone who has been victorious in battle.


Another interesting theory is that Goddess Durga was associated with mountains, (she is also referred to Vindhyavasini, one who resides in the Vindhyas, Parvati meaning daughter of the mountain or parvat, Vaishno devi, again residing in the mountains, to name a few) and was probably a deity of the locals who resided around mountains, where the terrain was tough. Such regions were at the periphery of civilisations and thus many a tribal community or marginalised sections of the societies dwelt in such regions. According to this theory, Goddess Durga is seen to have had her origin in such areas. Puranic heroes, like Ram, Arjuna, etc. worshiping the goddess indicates the assimilation of such goddesses in the mainstream pantheon, leading to the assimilation of the marginalised sections of the society into mainstream civilisation.


The above can be seen as an interesting example of mythology having a laudable function at its core, besides telling interesting myths.