Cilappatikaram – the Tale of an Anklet – Part 3


In the previous articles we read about the famous Tamil epic Cilappatikaram. This time we will discuss a few important pointers to the epic –

Amongst all the well known epics of the world, this is probably the only one which has a female as the central character. While the focus is on the chastity and the fidelity of Kannagi, there is no denying that she is the hero of the epic. Her character is above suspicion and her chastity had the power to invoke the gods, who had no choice but to attend to her (this is similar to the character of Nalayani http://utkarshspeak.blogspot.in/2014/02/why-did-draupadi-have-to-suffer.html ). Kannagi in Tamil means ‘virgin’, this gives rise to the comparison of Kannagi with the Panch-kanyas of the two epics, Ramayan and Mahabharat. Her heroism shows up when she doesn’t take her husband’s death as her destiny and simply end her life. She rushes to the court, gets her husband’s name absolved of the allegation, and punishes both the king and the city which had harmed her husband and her marital life. Unfortunately in present times, she is remembered more for her chastity than her courage to question the Kings judgement and even punishing him and his kingdom for the same. 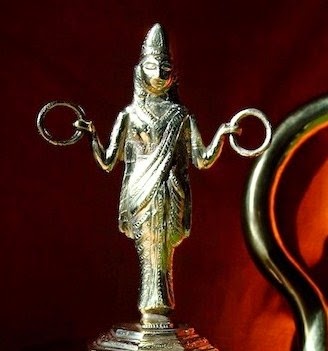 At a time when Sanskrit dramas were eulogising the Kings and the Gods, this Tamil literature had the courage to eulogise an ordinary mortal and show the royalty, guilty of injustice. It sure needed courage to write an epic where one was questioning the sense of justice of the King. Even if we accept that the epic was based on an already known folktale, the author did not take liberty to change this aspect, as we have seen such changes take place in numerous instances in other versions of the established epics.

Many scholars have marvelled at the fact that the author, Ilango Adigal, though a Jain monk, has written in details of worldly life with a flair which is both surprising and unbelievable. Scenes of love, pangs of separation and the life of royalty rubs shoulders in details with the lives of common folks and the lives of Jain monks and nuns. Matavi’s dancing skills along with the music of the times too are mentioned with the details befitting that of a connoisseur. This remarkable feat though has been questioned by some skeptics, but at the end of it all, there is enough evidence to the fact that the epic was indeed written by Adigal. Also, Adigal does not use the epic to propagate Jainism (though he has a Jain nun as an important character); he has taken into consideration the basic Tamil life and the religious status of the people of the time, which was primarily Brahminism with some spread of both Buddhism and Jainism.

The above is a message for both the royalty and the common man. While the women were eulogised for their fidelity, the men are asked to lead a moral life. In one scene, Kavunti, a Jain nun turns two people into jackals when they teased Kannagi. According to Kavunti, disrespect towards anybody, more so women, was not a trivial thing.

Another interesting aspect is the characterisation of Matavi, the proverbial ‘other woman’. While Matavi was a dancing girl, whose life revolved around music, dance and riches, she is treated with a lot of respect. Her knowledge of music and dance is exemplary. She gives birth to the daughter of Kovalan, a sign of her love for Kovalan. She even pleads for his return, when Kovalan leaves her for good. In the entire epic, nowhere has Matavi been blamed for breaking the relationship of the happy couple, even Kovalan blames destiny for the break-up and not Matavi. Even the parents of Kovalan blame their son, but not Matavi. Later, Matavi is seen becoming a Buddhist nun, as a sign of atoning for her act. It called for a lot of maturity by the author to create such a character, and needless to say, for the audience to even accept such a character.

However, such a masterpiece is not devoid of criticism by the modern scholars. Cilappatikaram has its share of brickbats too.

Next we will read the criticism that this masterpiece of an epic has faced over times. Keep reading.....


Posted by This is Utkarsh speaking at 9:20 AM