Cilappatikaram – the Tale of an Anklet – Concluding Part


Many scholars have declined to accord Cilappatikaram the status of an epic for a number of reasons. According to some, it was not the story of royals and gods and nor did it culminate in to a war of ‘epic’ proportions, like all the well-known epics of both India and others. However, what one cannot overlook is the enormity of the epic and the depiction of the Tamil culture in the poetic verse form. While it has all the elements of an epic, the comparisons with Ramayan and Mahabharat have left the epic in the backyard of literature; even so that many a Tamilian is unaware of this masterpiece of Tamil literature.

Many have questioned Kannagi’s cursing the city of Madurai even when the King and the Queen had died due to the misjudgement. When Kovalan and Kannagi enter the city, they were supported by the locals and even helped by a few. To mete out such fury to the locals, who were not at fault is seen as a chink in the characterisation of Kannagi.

Another very modern criticism was that when Kannagi was left by her husband for a dancing girl, where was the need for her to take him back, when all he had come back was due to a misunderstanding with Matavi? He had come back only because he felt cheated by Matavi and not because of realisation that he was wrong. Modern day feminists feel that eulogising such ‘sacrificing’ aspects of women’s characterisation, is erroneous for the self-respect of any woman. This only leads to greater promiscuity by men as they know that their wives were always there when needed, and end up having the best of both the worlds!

Besides the critics of literature having their say, modern day politics too has had its share of controversy. The statue of Kannagi was first installed by the Annadurai DMK government way back in 1968, as the pride of Tamil Nadu. According to a politician, Kannagi’s statue was “a symbol of the two principal roots of Tamil culture, aram (righteousness) and veeram (valour)”. In 2002, after a truck rammed into the pedestal of the statue, the statue was shifted from its place and taken to a museum, as it was supposed to be obstructing the traffic. People saw in it a conspiracy, as it was rumoured that the then Govt had got it removed as astrologers had warned the AIADMK chief Ms. Jayalalitha that the presence of the statue would bring her bad-luck. 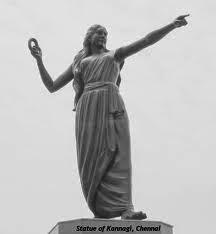 This led to an agitation and the statue was later installed at the Marina beach by the DMK Govt, where it still stands.

Finally, to conclude, in all the analysis and criticism, one thing should not go unnoticed, especially at this stage of our political situation. The King of Pandiyan should be an example of what every leader or ruler should be. The king gave up his life, nothing less, for a mistake that he made. How I wish we had at least a few of such leaders in the current state of our national politics!

With this, I conclude the series on the Cilappatikaram.

Posted by This is Utkarsh speaking at 5:07 AM