Medea is an interesting character from Greek mythology. Was she a villain or was she a victim, has been the debate for very long. A woman who takes lives, is a villain, and if the lives she has taken are that of her own brother and sons, then there is no doubt she is one. But even then, the question arises, was she one? Was Macbeth a villain or was he a victim of circumstances? Was Macbeth a victim of his ambitions, fuelled by his wife, and thus a tragic villain? Was Othello a victim of suspicion and jealousy or was he inherently evil? All such characters had a fault in their fate and Medea was no exception. While Greek mythology in general is not quite appreciative about Medea, Euripides in his play 'Medea’, tries to portray Medea as a tragic heroine. This article is based on the play by Euripides.

Before we refer to the play, a brief background is necessary.

The story begins with Jason (of the Argonauts fame). Jason was the designated King of Iolcus, in Greece, but since he was too young to rule, he was sent to be educated by Chiron, the centaur. In his place, his uncle Pelias ruled the kingdom. When Jason returned, Pelias was not keen to part with power. Pelias asked Jason, as to what could be done to get rid of a person, who was not wanted. Jason answered that the person should be sent to get the Golden Fleece. Pelias promptly asked Jason to get the Golden Fleece for him and Jason decided to accept the challenge.
Soon Jason sets out on the expedition with a selection of fifty heroes of the times (Hercules and Orpheus being among them), in a ship called the Argo, considered to be the first large ship and a prototype of naval ships to come. After many adventures, and with the help from Goddess Hera, Jason reached Colchis, the land where the Golden Fleece was supposed to be guarded by a dragon. At Colchis, they were greeted by Aeetes, the King of Colchis and his daughter Medea.

When Aeetes asked Jason the cause of their arrival, Jason said that he had been entrusted with the task of bringing the Golden Fleece and for that he was willing to render any service that the King might ask. While this angered the King to no end, he decided not to react harshly and set his terms for handing over the Fleece. The King said that he would hand over the Fleece to Jason, only if he could yoke two monstrous and fire-breathing bulls and plough the land with them, to sow some dragons teeth, from which would spring armed warriors, who had to be then killed by Jason. Jason would then have to overcome the dragon, which stood guard to the fleece. If Jason achieved all this, then the fleece would be his.

Hera, in the meanwhile had instructed the god of love, to make Medea fall in love with Jason, as she was rumoured to have magical powers which would be needed by Jason to achieve the tasks given to him. Jason accepted the challenge and decided to seek help from Medea. When the two met, Medea who had already been besotted by Jason’s looks was now madly in love with him. She decided to help him and to cut short a long story; Jason achieved all that he had been asked to do.

When the King learnt about his daughter’s betrayal, he was angry and chased a fleeing Jason and Medea, since the latter had no choice but to flee with Jason. It is said that during the conflict, Medea’s brother was killed and according to a version, Medea cut her brother into pieces and flung them all over the sea, so that her father would stay back to collect all the pieces for a respectable funeral. This gave the fleeing Argonauts time and soon they were way ahead. Jason got the Golden Fleece and Medea lost her country and family.
Soon Medea and Jason reached their country but Jason’s uncle, Pelias was still not willing to part with the throne. Medea used her magical powers once again. She told the daughters of Pelias that she had the power to restore the youth of their old father. 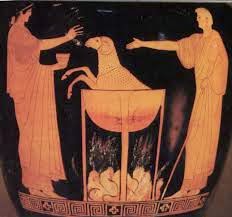 She demonstrated it by cutting a ram to pieces and putting it in a cauldron with magical herbs and out came a lamb. The unsuspecting girls were impressed by this and they decided to rejuvenate their father. They killed their father and cut him into pieces and put them in the cauldron, but this time Medea did not use her magical powers to bring Pelias back to life. This however did not go down well with people and once again Jason and Medea along with their two children, had to flee and reached Corinth seeking asylum.

Jason and Medea along with their children reach Corinth and seek asylum. At Corinth, the King of Corinth was aware of the fame and the heroism of Jason. Soon Jason leaves Medea and gets married to Glauce, the daughter of the King of Corinth. Medea is shocked to learn about the development and had been sulking at the rejection for no apparent reason, except ambition, which was so obvious. Needless to say that Medea felt used and thrown away.

We will continue from here tomorrow......Keep reading.....

Posted by This is Utkarsh speaking at 5:53 AM