This is a story that is part of the oral narrative traditions of the Kunknas, who have their own version of Ramayan. The Kunknas are a coastal tribe found in an area called Dangs which is a region located on the borders of South Gujarat & Maharashtra, states of India. Many of them speak a dialect known as Dangi, which is a mix of languages, namely Gujarati, Marathi and a bit of Hindi. 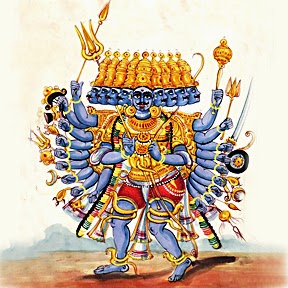 The Kunkna Ramayan starts with the story of Ravan and explores the life and times of the demon king for a significant part of the epic. The story goes that once there was a king, who had seven sons. Though he was a King he lived like an ordinary man and worked hard for a living. Out of the seven sons, six were able bodied, but the youngest one had no arms and legs, just the torso and a head. His name was Ravan. Ravan could do very little by himself. So all day, he would lie in a corner and depend on his siblings and parents for almost every task that he had to undertake.

Soon the six sons grew up and were married. While they did continue to take care of Ravan, they were beginning to get tired of looking after him. One day the six brothers and their wives decided to throw him out of the house and asked him to take care of himself. Ravan pleaded and cried, but the brothers threw him out saying that Mahadeo, their Lord must have decided his fate such, and who were they to interfere with his justice? If he wanted justice then he might as well go and approach Mahadeo.

Ravan had no choice and so tumbling and turning, he crossed fields and jungles and reached the shrine of Mahadeo. Bleeding and bruised, he started his penance. After about six months, Mahadeo who had seen everything and was impressed by Ravan’s ability to survive despite all odds, appeared before him and asked him to seek a boon. Ravan said that all he wanted was legs and arms. Mahadeo took him to his abode and asked him to rest for the night.

Next day, Mahadeo told Ravan that he had to visit Earth to feed the birds and bees and that he should wait until evening when he would be back. Before leaving, Mahadeo warned him not to enter a particular room, as that would bring him trouble. Ravan felt slighted. He was sad that Mahadeo cared less for him than he did for his birds and bees. He felt that there was no one in the entire universe that wanted him and life was not worth living anymore.

Ravan decided to end his life. He pushed open the door that Mahadeo had asked him to leave alone and entered the forbidden room. But before he could take a look around him, he felt himself falling down a well. He was drowning and in order to survive, he swallowed water from the well, one, two, three....nine mouthfuls. And no sooner had he done that, there sprang nine heads on this shoulders, nine arms on each of his sides and two legs. Ravan was shocked at this development. But he managed to pull himself out of the well and out of the room. He came out to find Mahadeo waiting for him. Ravan appealed to him for help, but Mahadeo threw his hands up in despair. He expressed his inability to do anything, since Ravan had drunk the water from the well of life which had given him all those heads and arms. Ravan didn’t know what to do. He was worried, who would give him work? Sorry for him Mahadeo said, that he would give him a piece of land called Lanka and he could rule that place. Ravan accepted the offer since there seemed to be nothing else that Mahadeo could do.

While leaving the abode of Mahadeo, Ravan saw Parvati climbing the stairs with a pot of water. Ravan again approached Mahadeo and said that since he had agreed to give him whatever he had asked for, he wanted Parvati for a wife, as he would never get any woman to marry him. Mahadeo reluctantly gave him Parvati. Ravan rushed to his land with Parvati closely following him.

All this was being observed by the assembly of the gods in Dwarka. Narandev, decided to intervene. He took the form of a local tribal and placed himself on the path that Ravan would take with an old buffalo. Ravan saw him pushing the buffalo and as he came closer, Narandev asked for help. On enquiring, Narandev said that the buffalo was a gift from Mahadeo, whom he had been serving for long, but as usual he had been cheated. The buffalo was old and useless. When Narandev learnt that the woman with Ravan was Parvati, Narandev told him, that he had been visiting Mahadeo for many years and he knew this wasn’t Parvati, but some maid, while Mahadeo’s wife was very beautiful. He should go back and check.

A furious Ravan, fell for Narandev’s words and decided to go back. Narandev in the meanwhile picked up a frog from the lake and changed it into a beautiful lady and took her to Mahadeo’s abode. On reaching there, he explained everything to Mahadeo and told him to hand over the woman when Ravan asked for her. But things did not go as smoothly as expected. One glance from Mahadeo made the frog woman conceive. She waspregnant. When Ravan came, he saw the woman standing who was better dressed and more beautiful than the one he had taken along. So he asked for the woman and returned Parvati. Mahadeo did as advised and Ravan decided to leave with the woman.

On the way, they decided to take some rest. Ravan laid his head on the lap of the woman and went off to sleep. The woman meanwhile was drawn towards a few frogs frolicking in the nearby lake. She decided to join them. She folded her saree neatly into tiny layers, kept it under Ravan’s head and joined the other frogs in the lake. When Ravan woke up and didn’t find the woman, he shouted in anger. The loud voice of Ravan shook the earth and created ripples in the water of the lake. The sound of his voice unnerved the woman and in fear, she aborted her foetus which fell out of her womb and was carried away in the waters. When she explained everything to Ravan, he didn’t pay much attention to her and decided to move on. And as the Kunkna Ramayan goes on to reveal, the foetus was later found in one of the nearby fields and the baby grew up to be Sita!

Posted by This is Utkarsh speaking at 5:19 AM