Yesterday we read about the devotion of Kannappa Nayanar.

Another myth which gives an example of appeasing Lord Shiva with devotion is the myth of Kirti-mukha from the Linga Purana.
Many of us would have noticed a gory gargoyle like face staring down at us from the walls of temples at the entrance, especially in the South Indian temple architecture. It represents an ugly, but ferocious face with eyes protruding, but still referred to as Kirti-mukha the ‘glorious-face’. In an otherwise ornate entrance, this stands out as a stark blotch. What is it and why is it so placed?
According to a myth, there was a ferocious demon by the name of Jalandhara who had wreaked havoc in all the worlds and had evil designs on Parvati, who he thought did not quite deserve Shiva for a husband. He sent his emissary, Rahu to Shiva to give up claim on Parvati for the sake of the mighty Jalandhara. As soon as Shiva heard the message, he got angry and in his rage a dangerous devouring being emerged from his eyebrows. This being was breathing fire and raging with terror. The sight put fear in the heart of Rahu and he begged Shiva to save him. Seeing this Shiva ordered the being to leave Rahu. But the being was created to devour Rahu and so was hungry and asked Shiva and his hunger had to be satiated and since he was the creator, he needed to resolve the same. Hearing this, Shiva simply said – “Go ahead and eat yourself”. No sooner had Shiva said this, that the being started eating himself starting from his feet, to body and then arms. Just when only the face was left, that Shiva stopped him and was so impressed with his devotion towards his creator, that Shiva blessed him and named him Kirti-mukha or the face of glory and gave it a place of honour on the ramparts of the temple. 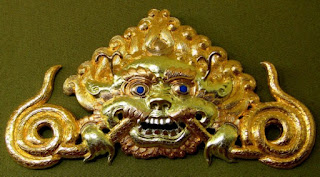 The presence of Kirti-mukha can be interpreted in many different ways. It can be seen as a symbol of utmost devotion, where one does whatever the deity asks one to do, including killing oneself and the face is a reminder of such devotion. Installing it at the entrance is to remind one of the extremity of the devotion and if the one entering into the temple is willing to or capable of touching the extreme.
The other possible philosophical interpretation is the presence of un-reigned aggression and passion existing within each one of us and how this raging fire is all all-consuming one. How such fire can be the cause of one’s own destruction should be known to each one of us, who are seeking divine blessings (and help at times). The knowledge is key and the message is that the solution is within us, it’s just that we are not aware of it or have not accepted it hitherto.
Many have interpreted this as a reminder to keep ones evil thoughts outside the temple and keep one’s mind clean of such evil thoughts when one is seeking His blessings. This is the most common interpretation and many who do not know the genesis of the mukha could say that. Some even say that this has been a part of an adornment from the Vedic times and the authors of the Linga Purana simply wove a beautiful myth to reason out the odd part of the temple architecture.
What do you think?
Posted by This is Utkarsh speaking at 9:15 AM