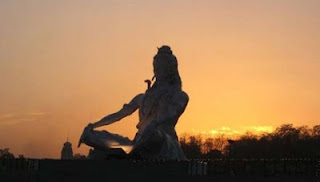 Today is Mahashivratri, the day of Lord Shiva, one of the key members of the Holy Trinity from the Hindu pantheon. There are a number of myths associated with Shiva, but the common thread in all of them is his anger and the easy appeasement of Lord Shiva. Compared to the other gods, the worshipping of Lord Shiva is not very ritualistic and the focus is on devotion. Be it the singular minded focus of Sati or continuous meditation of Parvati or dogged perseverance of Ravana, Shiva is appeased only by devotion and by anybody. There are a number of myths associated with this aspect of Shiva, but I will take up some of the uncommon myths associated with this aspect of Lord Shiva.
The first among them is the story from the Periyar Purana, that of Kannappa Nayanar, , who is considered to the epitome of devotion in South India. Kannappa was born in a tribal family and was not well versed with the rituals of worshipping Lord Shiva, but that did not deter him from worshipping a shiva-linga regularly. Since he was a hunter by profession, his hands were always soiled by the blood of his kill, so he carried the water from a nearby river in his mouth and the flowers on his own head to offer to the shiva-linga. Thereafter he would offer the best part of the animal that he would have killed to the shiva-linga. His ignorance of the rituals and the method of the choice of the offerings would upset a local Brahmin who was ritualistic to no end. This went on for some time till the Brahmin sought divine intervention. 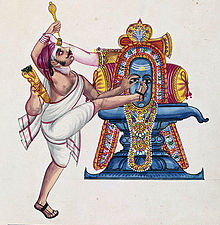 So one day Lord Shiva asked the Brahmin to hide behind a tree and observe whatever happened the next day. Next day when Kannappa reached the temple, he found blood oozing out of one of the eyes drawn on the shiva-linga. He was very upset and started rubbing herbs that he thought would heal the wound, but this did not help. Kannappa immediately took out a knife and cut out his one eye and stuck it on the shiva-linga, and the blood stopped. Kannappa was thrilled and started dancing with joy. But then he noticed that the other eye had now started bleeding. Immediately Kannappa decided to give up his other eye too. But if he did so, he would turn blind and would not know where to stick the other eye. To avoid this, he put his toe on the spot of the bleeding eye on the shiva-linga and cut his other eye too. Seeing this Lord Shiva appeared and blessed him with gave him his eye-sight back and the Brahmin hung his head in shame.
This aspect of devotion can be seen as de-ritualizing the worship of Lord Shiva and making the deity more accessible to the common man and in some cases to the outcastes of the society. The people who were not educated, lived in the fringes of the society due to the caste-structure could also worship Lord Shiva, irrespective of the fact that they were meat-eaters or drank alcoholic drinks. Shiva was like one of them. The myth actually makes the Brahmin redundant. The genesis of this myth could lie in the fact that the hegemony of the Brahmin class could have made the gods virtually inaccessible to the common man. The notion that the way to god was through the doors of the Brahmin class only was causing concern to a set of worshippers who did not want to go through the mumbo-jumbo and such feelings could have given rise to such myths. The myth espouses pure devotion, devoid of any rituals. 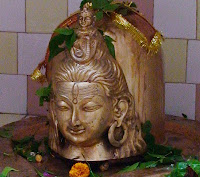 This myth also introduces to a different form of iconography. In many parts of India, faces are drawn on the shiva-linga and the face usually denotes a virile face. Sometimes there is a face carved on the linga too. This shows that the worshippers were not content with the phallic look of the linga but wanted to associate a more virile and strong appearance on the symbol or rather a form to the formless.
Next time we will take another example of extreme devotion…..keep reading.

For more articles on Lord Shiva -

Posted by This is Utkarsh speaking at 9:17 AM