The Lark’s Song - A Short Story

Once upon a time, there was a lovely forest, green all around, crowned with lovely blossoms and birds chirping on every tree. On one of the trees was a nest where lived two larks. The father lark would go gathering worms every day, and the mother lark, flush with pride on the eggs laid by her, would spend the whole day nurturing her eggs. 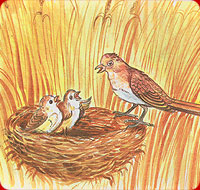 Soon it was time for the eggs to hatch and the proud mother lark saw the face of a small lark making all efforts to nudge itself out of the first egg. The mother lark shed a tear of joy and pride on seeing it’s first born and announced it to the world with a melody. The whole forest stood still and listened to the song of the lark – a song never heard before, a song of love, a song of motherhood.

Soon the other eggs started hatching and the pride only grew. The father lark worked harder to get the worms and the mother lark got busy in feeding and taking care of all of them. The first born however remained her favourite after all she experienced motherhood first through the little one. Soon it was time to teach them to fly and all learnt it well and fast. In due course the younger ones flew away and built their own nests and her once crowded nest wore a deserted look.
The larks were left all alone.

Soon the mother lark couldn’t fly well and was restricted to her nest, but she did not lose her sprightly will and kept singling her lovely songs so that none in the forest came to know of her loneliness and look down on her young ones, after all this was the destiny of all birds. It was only the father bird who could hear and feel the soulful melodies masked in the lovely songs. There was only one thing that she longed for – she wanted to hear her first born sing for her, as she had heard that he had acquired great skills in singing and was the heartthrob of many in another forest. She knew her time was close, and before she shut her eyes forever, she wanted to see and hear her first born. But the first born had flown very far and could no more hear the soulful songs of the mother lark.

The mother lark soon lost her voice and one fine morning, breathed her last. The forest lost a great soul and everybody mourned the death of the great singing lark. But nobody heard her last words before she breathed her last, not even the father bird, as he was too old to hear, what she could not utter!

Yesterday was Mothers Day and this story is an ode to my Mother, who I lost last week.
May her soul rest in peace.

Posted by This is Utkarsh speaking at 5:54 PM