Samuel Taylor Coleridge, the English poet is supposed to have said – “No mind is thoroughly well organised that is deficient in a sense of humour”. Couldn’t agree with him more, especially since the unorganised minds in a particular address of our country, known as the Parliament of India, seem to be taking us towards a humourless society.

A simple expression of thought in a humorous drawing (call it ‘cartoon’ if you wish) has set all our politicians up-in-arms. Is cartooning such a denigrating profession? Or is it a form of art which has become a trifle dangerous for the ubiquitous humourless political ilk? What with the likes of R K Laxman, Shankar, Sudhir Dar, Mario Miranda who have achieved iconic status as cartoonists? None faced the wrath of any politician the way the present ones are facing.

Does it have to do with the fast evaporating sense of humour of this class of citizenry who are the real the source of such humour? US President, Thomas Jefferson is supposed to have said – “Good humour is one of the preservatives of our peace and tranquility” – something quite contradictory seems to have happened here in our country. 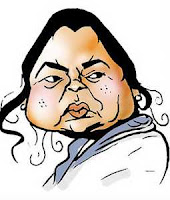 A certain lady from the East, put a man behind bars for circulating a cartoon (Freedom of expression is no more a right I am told, so I will refrain from taking her name, lest I be whisked away from my residence and thrown into the recently painted blue dungeons by her goons). No amount of hue and cry got him a bail till her whims decided to bestow benevolence on the poor man! She prefers participants in drunken and street-side brawls as against innocent humorous caricatures! What a sorry state (quite literally too!).

Here in West, the office of an educationist who assisted in the compilation of certain text books was ransacked by few obscure goons, owing allegiance to a political party set under the shadows of a national Hero (I am scared to take the name of anybody, for though Kipling might have said “Oh, East is East and West is West and never the twain shall meet”, the times have changed and the twain seem to be shaking hands in every silly aspect of common man’s life!).

Dear Mr. Jefferson, your quote is outdated in my country and good innocent humour has only led to the lack of peace and tranquility! 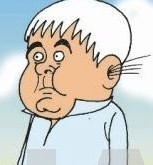 Recently on TV, I heard a certain ex-Railway minster who is a rich source of humour for people of all ages and class and was associated with sudden depletion of fodder in his state (I insist on not taking names just to continue to live a happy citizen in this humourless country!) ridiculing the cartoonists. Needless to say, that half of what he said was lost in the uproarious laughter that followed no sooner he started mumbling. I couldn’t hear what he mumbled, but to be fair to him, I think all cartoonists should refrain from drawing his caricatures. His ‘honest’ photograph does what a good cartoonist cannot!

In the olden times, there were deities of humour, who were both venerated and worshiped. The Greeks had Baubo, a goddess of humour who was bawdy in her behaviour, but managed to lift spirits wherever she went and provided spells of laughter in otherwise serious epics of the Greeks. The Egyptians worshiped Bes, who was considered to be a god of humour. Bes was unique in the sense, that he was the only deity who was always depicted as full-face unlike the profiles that all other deities were depicted as in Egyptian mythology. Bes was also considered to be the god of child-birth and was supposed to be dancing and yelling in the room where a child-birth was taking place to ward away the demons who were hungry for new life. The Egyptians believed that when a new-born child smiled all by itself, then it was because Bes was making funny faces at them! Even our gods, like Lord Krishna and others like Narada Muni, were known to indulge in pranks and generate the much needed laughter and all at the expense of the others.

So why are our political brethren getting so uppish and devoid of the much needed sense of humour?

Mahatma Gandhi is supposed to have said – “If I had no sense of humour, I would long ago have committed suicide”. All the self-proclaimed politicians who sing paeans to Gandhiji at the drop of a hat should take his quote seriously.

Can you imagine the good fortune of a sudden elimination of the entire humour-less community!