Recently I came across some interesting events which makes me wonder if the world was one and man broke it up into different countries. Similarities in festivals across borders have always been fascinating and here I will write about one such festival which has strong resemblance to one of our festivals, i.e. the Rath-yatra of Lord Jagannath, Puri, in Odisha.

Nepal is known for its picturesque beauty and is a Hindu nation, so it is not uncommon to find Hindu gods and goddesses and temples in that country. The famous Pashupatinath Temple and a few Shakti-peeths are well known pilgrimages which have their own myths. Nepal is also a Buddhist centre of pilgrimage and there are numerous centres for the Buddhist belief. However, what has drawn my attention is a recent chariot-festival in the country which is known as Rato Machhindranath Yatra which is an important festival for both Hindus as well as Buddhists of Nepal. 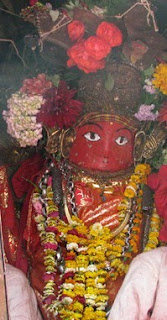 Rato Machhindranath, “Rato” means red and “Machhindra” means fish which is derived from “machhindra” or “matsendra” and finally “nath” meaning god. Rato Machhindranath is a red coloured deity and is a god of rain in Nepal and is worshipped just before the monsoon starts. Nepal is an agricultural country and farming being the mainstay of close to 80% of the local population, lends credence to the significance of rain. The deity is worshipped to ensure a good monsoon and prevent a drought.

An interesting myth is associated with the deity. According to a legend, Gorakhnath, a renowned disciple of the deity visited the valley, and was upset at the lack of importance given to him. He then caused a drought by taking away all the rain-making snakes with him. The troubled Nepalese then prayed and begged of the deity to save them. The deity was in Assam, India, at that time, and on hearing the pleas, came to Nepal in the form of a bee. On learning that his deity was in Nepal, Gorakhnath had to release all the snakes to pay his tribute thus causing rain and also learning a lesson of humility in the process.

The high point of the festival is the building of a huge three-storied chariot where a replica of the deity is housed and pulled by hundreds of believers. The chariot is taken all over the city of Patan in Nepal and the journey lasts for a few weeks which are earmarked for celebration. The journey is accompanied with beats of the traditional drums and cymbals. This aspect of the festival is common to the famous Ratha-yatra of Puri, Odisha.

In the earlier days, the King of Nepal used to flag off the yatra, again a similarity to the Puri-yatra, where even today the descendants of the erstwhile royal family sweep the ratha, i.e. the chariot before the beginning of the journey.

Rato Machhindranath is worshipped by both the Hindus and Buddhists. The Buddhists consider him to be their Avalokiteshwara or Lokeshwara, the Bodhissatva of compassion or Bunga Deo, i.e. the god of agricultural prosperity. The Hindus consider him to be a form of Lord Vishnu (reference of Matsya avatar of Lord Vishnu). A popular version considers him to be a god who was brought in from Assam by a local farmer to ensure good monsoon in Nepal.

The Nepalese are also worshippers of the Naga’s, i.e. the snake-gods. The reference of rain-making snakes in the earlier myth shows how well every section of religious beliefs has been weaved into this festival. The locals believe that during the festival and the rituals, the Nagas, rain-making snakes observe the entire proceedings from the clouds.

Next we will read about another Ratha-yatra which used to take place continents away from ours.