Yesterday was World Disability Day – a day observed as an international day of people with disability, as promoted by the UN since 1992. In India, both the Government as well as the Society at large has much to be empathetic as well as respectful of the people with disabilities. On this day, I am reminded of a perfect mythological example of disability not coming in the way of knowledge and fame. 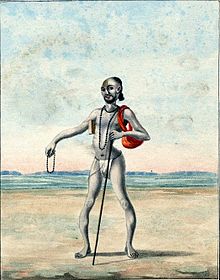 This is the myth of Ashtavakra.

According to the epic Mahabharata, once upon a time, Sage Uddalaka ran an ashram. One of his bright students, Kahola, got married to his daughter Sujata and stayed on at the ashram. When Sujata was pregnant, she would attend all the classes taught by both Uddalaka and Kahola, so that her unborn child could get a head start on the scriptures even before he came into the world.

Once when Sujata was attending a class by Kahola, the embryo heard the recitation and corrected Kahola of a mispronunciation. Kahola was angered at the impudence of an unborn child and cursed it with a deformity. This happened eight times and when the child was born, it had eight deformities, wherein the child was crooked in eight places and was thus named Ashtavakra, meaning one who had eight bends in his body.

While the child was very young, Sujata came to know that the King of Mithila, King Janak was going to perform a fire yagna and was inviting all the sages from far and wide. She egged Kahola to go there with the hope of making some money. On reaching the court of King Janak, Kahola was made aware of a condition, according to which the yagna could begin only after a sage would defeat Sage Bandhi (a very well known and renowned sage of the times) in a debate. However, if any sage was defeated by Sage Bandhi, then he would have to drown himself in the river. Needless to say, that Kahola lost the debate and was drowned in the river. The incident left a deep impact on Sujata and soon Ashtavakra was put under the tutelage of his grandfather, Sage Uddalaka.

Ashtavakra completed his education at the age of twelve and soon learnt about the yagna and his father’s death. He decided to go to the court of King Janak and challenge Sage Bandhi, who was known for having got many a sage drowned and had earned a reputation of invincibility. When Ashtavakra reached the court of the King, the gathering there was more than amused to see Ahstavakra. They did not hide their amusement when they came to know that he intended to challenge none other than Sage Bandhi. Ashtavakra was angry at the vanity of the crowd and is supposed to have said that he was surprised to see an august gathering of learned people laugh at his deformity when they knew very well, that a river flows crookedly, but the water never does. One should not look at the external body, but the knowledge within. This outburst shut up everybody there. King Janak is supposed to have had a discourse with him and after being satisfied about his knowledge, invited Sage Bandhi for a public discourse with Ashtavakra.

When Sage Bandhi repeated his condition, Ashtavakra replied that he agreed to it, but the same condition would apply to him, if he lost. Such a condition was never put forth to Sage Bandhi before and all present were shocked to hear that. Sage Bandhi agreed and the debate started. The debate ended sooner than expected and sure enough Sage Bandhi was defeated! At this stage Ashtavakra disclosed his parentage and insisted that the Sage be drowned to avenge the death of his father.

However, Sage Bandhi revealed that he was actually the son of Varuna, the lord of the seas and he was sent on earth by his father to send renowned sages from earth to enable his father to complete a twelve year yagna. The good news was that the yagna was complete and if they went towards the river, they could find all the sages emerging out of the river. They reached the river and as mentioned by Bandhi, all the sages who were drowned, emerged out of the river including Kahola. After this Bandhi advised Ashtavakra to take a dip in the river and no sooner had he done this, he was cured of his deformity and emerged looking young and handsome.

This is probably one of the best myths in Hindu mythology, which makes one look at a physical deformity as only that, physical. Ashtavakra’s exclamation at the court of King Janak, makes a very interesting observation about looking at beauty which is skin deep. Knowledge is what gets one ahead in life and not necessarily just ones looks. We might be living in a changed world where the statement might not mean much, but way back then, knowledge and its effective usage was all that mattered to people. In Ashtavakra’s own words, just as the nature of a temple is not affected by its shape, so was the deformity or the shape of man’s body which did not affect his inner self or the soul.

The discourse between Ashtavakra and King Janak prior to the debate with Sage Bandhi is a treatise by itself which is better known as the ‘Ashtavakra Gita’ (alternately referred to as ‘Ashtavakra Samhita’) and is replete with profound knowledge. In the form of question and answers, King Janak gets initiated into self knowledge and realization. Many like Ramakrishna Paramhansa and Swami Vivekananda have quoted heavily from this treatise.