All of us in life have vulnerability – something that is a weak spot in our life. It could be ones character trait, or a liking for something material or person, or anything, but everybody has vulnerability or vulnerable zones.


Mythology has exemplified this vulnerability into a weak spot for many a mythical hero, which ends up as a cause for destruction. Let us see some of these vulnerabilities which led to their nemesis.


One of the first that comes to my mind is Achilles Heel, which is synonymous to the phrase ‘weak spot’. To say that someone has an Achilles Heel is to imply that the person has a weak spot or a major vulnerability.


Achilles was the son of a mortal father and the nymph Thetis. Thetis was very beautiful and had attracted Zeus, the King of gods. But, then he came to know about a prophesy, that the child of Thetis would be far greater than his father, and Zeus was not interested in losing his position. One by one, all the gods lost interest in her and she had to settle down for a mortal by the name of King Peleus. When Achilles was born, in a bid to ensure that her son would be immortal, Thetis dipped the baby Achilles in the River Styx. This made Achilles invulnerable, except for the place where Thetis’s fingers had gripped him while dipping, which was his heel. Thus his heel was mortal enough to strike a deadly blow during the Trojan War. Achilles was killed by an arrow by Paris, which was divinely guided to Achilles’ heel.


In Mahabharat too we have many such examples. Towards the end of the war of Kurukshetra, when the Kauravas were suffering heavy casualties, Gandhari sent word to Duryodhan to come and see him without wearing any clothes before the crack of dawn. She would open her blindfold from her eyes, which had immense power due to her piousness and fidelity, and her glance would make him invulnerable to any weapons whatsoever. 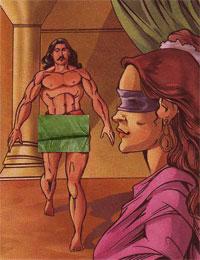 When Duryodhan was on his way, he was stopped by Krishna, who ridiculed him for allowing his mother to see a grown-up male without any clothes and that too for the first time, since Gandhari had not seen any of her sons. Being chastised he decided to cover himself below the belt with a banana leaf. When Gandhari opened her blindfold, the power of her eyes made Duryodhan’s entire body invulnerable, except for his thighs. Later, during a duel, Bhima hits Duryodhan on his thighs, leading to Duryodhan’s death.


The above are examples of physical vulnerability. But there are many instances where we find examples of non-physical weaknesses in man’s life.


An interesting example is that of the Jewish hero, Sampson. Sampson was chosen by God to deliver Israel from the hands of the Philistines who were occupying the land and oppressing Israel. To enable him in his mission, God had granted him immense power and this power resided in his hair. As Sampson grew up, he started falling for prostitutes and they soon became his weakness. In one such moment of weakness, he fell in love with a harlot, by the name of Delilah. Delilah was paid by the Philistines to learn the secret of his heavenly strength, and Sampson who was not supposed to reveal this to anybody, committed the cardinal sin of telling it to Delilah. Soon, Delilah put Sampson to sleep and later shaved his head. When Sampson woke up, he was given to the Philistines, who blinded him and put him in prison. It is said that Sampson’s, weakness for women, made him immensely vulnerable and there are many an instance when he lands in problem, and sways from his heavenly duty.


In Mahabharata, we find many examples of non-physical weaknesses in man’s life. Karna was known for his charity. The cause of charity was so great for him, that he even decided to give his body armour (kavach) when asked for making him vulnerable to attacks in the forthcoming war of Kurukshetra, the time when he would have needed it the most. Dhritarashtra’s weakness was his son, Duryodhan, Yudhistir’s weakness was the game of dice and Bhima’s weakness was food and each of them had paid a heavy price for not being able to conquer their weakness.


A man’s (for that matter, woman’s too!) Achilles Heel can be anything – sex, alcohol, drugs, woman, anger, arrogance, greed, selfishness, laziness, procrastination, etc. There is no end to the vulnerabilities that we are surrounded by in life. It is important to understand and recognise them. One should be aware of what is ones weakness, not like Sampson, who did not know that his weakness for women would get him into trouble or like Yudhistir, whose ‘innocent’ love for gambling led him to lose everything again and again. Ignorance of one’s weakness or not accepting the same, both can lead to grave situations.


Now that you know all about vulnerabilities……what is your Achilles Heel?

Posted by This is Utkarsh speaking at 10:11 AM