If the heading of this article has surprised you a bit, then that sure was the objective! Yes, we do read about Hanuman in Mahabharata too.

Hanuman was blessed by Ram to be cheeranjivi, i.e. immortal. We come across Hanuman twice in the epic of Mahabharata.

The first and probably the well-known episode is when Bhim meets Hanuman. Bhim and Hanuman were brothers, as they were born of the same father, Vayu, the wind god. Once during the exile of the Pandavas, Draupadi asked for the Sughandika flower or the flower with the celestial fragrance. Bhim went into the jungle to get the flower. On the way, he found an old monkey lying with his tail blocking the way. Bhim haughtily asked the monkey to move its tail. Hanuman, asked him to do so himself, if it was bothering him. Bhim tried to move the tail, but couldn’t move it even an inch. Bhim knew that this was no ordinary monkey. He bent on his knees and asked him to introduce himself. Hanuman then showed him his usual form and Bhim sought pardon from him. This is considered a lesson in humility for an otherwise arrogant Bhim.

The other episode is relatively lesser known. Once at Rameshwaram, while looking at the Ramsetu, the bridge built by Ram, Arjun commented as to what made Ram take the help of monkeys to build a bridge when he could have built a bridge of arrows all by himself. Hanuman appeared and challenged him to build a bridge of arrows, which could just about hold the weight of one monkey. Arjuna accepted the challenge, and started building a bridge of arrows, which he was good at. But Hanuman managed to destroy every bridge by just one step of his. Seeing this, Lord Vishnu appeared and chided both, Arjun for challenging the mighty Hanuman and Hanuman for making Arjun feel so small that he was contemplating taking his own life in shame. 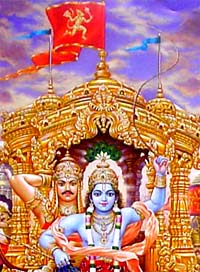 At this, Hanuman felt sorry and promised to help Arjun during the forthcoming war of Kurukshetra. Later during the war, he sat atop Arjun’s chariot, in the form of a flag, thus giving the chariot a sense of stability. At the end of the war, Krishna asked Arjun, to get off the chariot first, which was against the war protocol. As soon as he did, Krishna followed and then came down Hanuman and after bowing to Lord Krishna, he vanished. No sooner had he vanished, the chariot was up in flames and reduced to ashes. A shocked Arjun was at a loss of words. Krishna explained that the chariot had withheld all the celestial weapons hurled at them, thanks only to Hanuman and him, the only two who could withstand the negative effects of such deadly weapons. If they had dismounted first, then he along with the chariot would have been reduced to ashes!

The first one is a well known myth from Mahabharata, but the second one is a lesser known one, both giving lessons in humility to the Pandav brothers.
Posted by This is Utkarsh speaking at 9:20 AM