Continuing with untold stories of Ramayan, here is one more – the tale of Sampati.

Sampati, a vulture, is a relatively unknown character. However, his younger brother Jatayu is better known for making efforts to save Sita while she was being abducted by Ravan. But let’s begin the story from the very beginning.

Sampati and Jatayu were the mortal sons of Aruna, who was the brother of the famous Garuda, the mount of Lord Vishnu. Aruna was the charioteer of the Sun god. This pedigree made them special birds with large wingspans and the ability to soar high in the skies.

Once, the two of them decided to fly a race in the skies. As the race began, youth took over and without realising, they flew higher and higher. Soon they were reaching closer to the Sun. When Sun saw two specs closing in towards him, he turned his stare towards them. Sampati knew that they had flown too close and tried to dissuade Jatayu to turn back and give up the race. But the young Jatayu was soaring high. Seeing the Sun turn his glare towards them, in a moment, Sampati soared higher than Jatayu and covered him with his wings.

The Sun’s glare fell on Sampati, which burnt his wings, and soon he was heading towards the earth, as he had no wings left. Jatayu realised it all too late and he too followed his brother. In trying to save his brother, Sampati lost his wings.

Jatayu was concerned about his brother’s ability to hunt and feed himself since he had no wings. At this, Sampati is supposed to have said that since he won’t be able to hunt live animals, he would henceforth feed on dead ones. To this Jatayu vowed that since Sampati lost his wings trying to save him, he too would feed on dead animals only. It is said that since then all vultures feed on dead, unlike other birds of prey, who feed on live animals!

Coming back to the epic Ramayan, Sampati makes a fleeting appearance in the epic, unlike the heroic death of his brother Jatayu.

Before dying, Jatayu informed Ram, that he had seen Sita being kidnapped by someone in a flying chariot. Soon Ram sent a team of vanars to find Sita. The team comprising of Hanuman, Jambuvan, Angad, amongst others had reached the southern end of land and near the seashore, from where no land could be seen. The team was disappointed and lifeless and they collapsed near the shore. Sampati was watching them from a distance and was happy and joyously said that here was he hungry for so many days, and god has been kind to send him a dying army of monkeys to feast on!

Hearing this, Jambuvan remarked that life was so ironical. One vulture, Jatayu, gave up his life saving Sita, and here was another vulture trying to feast on the same set of people who are out to seek Sita. The name ‘Jatayu’ made Sampati approach Jambuvan, and asked him to tell him more about Jatayu.

All were surprised at this sudden change. Jambuvan 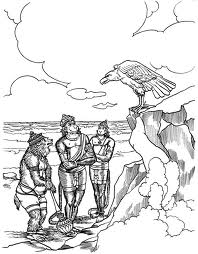 related the whole story of Jatayu had died trying to save Sita while she was being kidnapped. Sampati was both, proud and sad – proud to know what his brother did, and sad to hear that he was no more. Sampati then introduced himself and promised to help them. Sampati told them, that few days back he had seen the asura king Ravan take a hapless woman in his chariot across the sea, who must be the Sita they were looking for. Sampati was gifted with vision which could see long distances, and he could see Sita being held captive in the region of Lanka which was across the sea.

With this information, the search team went back with the news to Ram. Both the vulture-brothers contributed to the search of Sita. Jatayu told Ram about Sita being abducted and Sampati told the team that she was being held captive in Lanka.

Why then, have popular renditions of the epic focused only on Jatayu?

Posted by This is Utkarsh speaking at 9:25 AM