Scylla and Charybdis were two monsters from Greek mythology, who have contributed enormously to the English language. But before we learn about their contribution, lets us read about them individually.

Scylla (pronounced ‘skylla’ as in ‘sky’) was supposed to be a beautiful nymph and the daughter of a sea-deity. Once Glaucus, a fisherman who had turned into a sea-god, saw her, fell madly in love with Scylla. But Scylla rejected his love. She ran away to avoid him and hid herself. Glaucus would not give up and approached Circe, a sorceress to make Scylla fall in love with him. But when Circe, saw Glaucus, she fell in love with him and tried to convince her that Scylla was not worth it. When Glaucus was not willing to change his mind, Circe, decided to make her magic work. She prepared a poisonous potion and spilt it in the sea, where Scylla used to take her bath.

As soon as Scylla dipped herself to take a bath, she changed into a six-headed horrifying monster, each of which had sharp teeth. She was now a so huge that she could barely move destined to live a life of loneliness and misery. If any ship came too close to her, then each of her heads would seize the crew and killed them on the spot.

Charybdis was the daughter of the sea-god Poseidon. She would flood the land and claim the region close to the sea for her father, thus depriving Zeus, land to rule. This angered Zeus and he cursed Charybdis to become a huge monster which was all mouth. Since then, she was forced to hide in a cave on a tiny island in the Strait of Messina, between Italy and Sicily. She would step out thrice a day and suck up huge amounts of water, and at times along with it, passing ships too.

Scylla and Charybdis were placed face to face and soon became a mariner’s nightmare. Scylla was personification of a rock which was never visible to naked eye till you got close to it and risked bumping into it and Charybdis was the personification of a whirlpool which would gulp out entire ships. Both were fatal risks that every mariner dreaded and few managed to avoid. 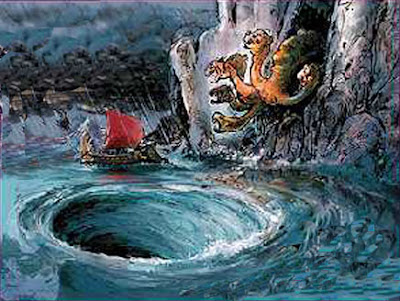 ‘Between Scylla and Charybdis’ soon came to be referred to as being in a tough spot, where one was expected to choose between two evils. In Homer’s Odyssey, the hero, Odysseus had to make a choice of sailing too close to any one of them, and he decided to sail closer to Scylla. By his choice, he minimised the risk, as only six of his sailors were killed by the monster, as against risking the drowning of his entire ship.

Life does not necessarily give us simple choices between good and evil. Sometimes we are made to choose from two evils and then the choice has to be made for the lesser evil, like Odysseus did. In our lives too we come across such situations; when the doctor tells someone that they can save the life of any one, the mother or the unborn child. To choose between the closing of an entire vertical due to losses or continue with the support team but no scope of sales or expansion, risking an exodus. To shut down the factory or reduce the staff by a huge number risking closure anyways. Such and many similar decisions grip an individual in both his personal or professional life nearly all the time.

‘Between Scylla and Charybdis’ is a phrase that has given rise to many idioms, like, ‘between a rock and a hard place’, ‘between the horns of a dilemma’, ‘between the devil and the deep blue sea’, etc.

Posted by This is Utkarsh speaking at 10:06 AM