Vietnam has a very interesting myth associated with the betel leaf and the way it is to be consumed. But first – the myth!

Once upon a time there were two identical twins, Tan and Lang. They loved each other and took great care of each other. After they lost their parents at a young age, their teacher took them in his shelter. Soon they grew up and the teacher’s lovely daughter fell in love with Tan and they were married.

Tan and Lang would leave in the morning to cultivate their land and would return in the evening to dinner prepared by Tan’s wife. Things were fine till one day, when Lang returned earlier than Tan. In the dusky darkness, Tan’s wife mistook Lang for her husband and welcomed him with a kiss. Before Lang could explain, Tan saw this and was very angry with Lang and shouted at him and accused him of trying to steal his wife. Lang tried to explain, but Tan would not hear of it.

Lang was sad and left home as he felt that his brother was not the same as earlier and he did not love him anymore. He ran away and continued running till he could move no longer and dropped tired close to a river and soon died out of exhaustion. The gods took pity on him and turned him into a huge limestone rock. 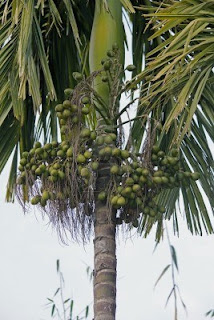 As anger subsided, Tan felt guilty for what he had done. He was also getting worried that his brother had not returned. He told his wife that he was going to get his brother back and would not return till he found him. Tan looked everywhere but could not find his brother. On reaching the river he felt peaceful and sat next to the limestone, but never rose, as he too died of exhaustion due to extensive walking that he had undertaken during his search. The gods again felt sad for Tan and they changed his body into the areca tree (also known as betel nut) which leaned on to the rock.

Soon, Tan’s wife was worried and she too set out to look for her husband and his brother. She too came near the river and could walk no further. She was found dead holding on to the areca tree. The gods changed her into the betel leaf plant which grew around the areca tree. 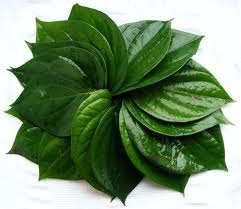 When the teacher returned and learnt about everything, he built a temple near the river to mark the love of the husband-wife as well as the brothers. Many years later, the land was hit by a devastating drought and all plants and trees died due to lack of water. But the areca tree and the betel leaf was as green and alive as ever.

When the King heard about it, he personally came 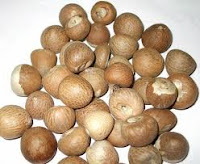 down to see. In the shade of the river, the King sat for rest and unknowingly took a betel leaf and some areca nut and started chewing. He found the taste bitter but refreshing. Something told him that he needed to add the limestone to it too. Since then, serving betel leaf with areca nut (or supari in Hindi) and limestone (or chuna in Hindi) became a must during marriages in Vietnam as a mark of marital fidelity and love between siblings.

The above is an interesting myth, which not only explains the origin of the betel leaf, but also the areca nut and the limestone, which is a must in any preparation of the paan or the betel leaf in any part of the world, including India. It also gives the reason of consuming the three together.