A lesser known shivalinga came to my notice recently. This shivalinga is natural and quite inaccessible, for majority of the devotees. 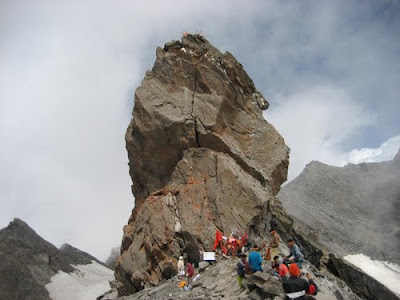 The shivalinga is in the form of a 72 ft gigantic rock, known as Shrikhanda Mahadev and is situated at a height of some 18000 ft above the sea level, on the mountains. The entire journey is planned over a period of ten days by the Govt of Himachal Pradesh which is open only for 15-20 days in July-Aug when the weather conditions are favorable. However, the journey is arduous and the trekking is quite tough.


The spot has an interesting legend associated with it. According to this, a demon Bhasmasur did severe penance to propitiate Lord Shiva and earned a boon. Bhasmasur asked for a boon of turning everybody to ash, by just putting his hands on him. On getting the boon, Bhasmasur tried to test it on Lord Shiva himself. Shiva ran away from him and hid himself in a cave. Later he took the help of Lord Vishnu, who met Bhasmasur in the form of Mohini, the enchantress. Mohini tried to lure him into a dance and during one of the movements, Mohini made Bhasmasur touch his own head, leading to him being reduced to ashes.

It is said that when Lord Shiva came out of the hiding from the cave, he appeared on the rock now better known as Shrikhand Mahadev. The rock has a crack in the centre of it, and this it gets its name from the same (khandit meaning crack).


As part of the journey to the spot, one comes across a cave, known as Devdank, the cave where Lord Shiva had hidden himself from Bhasmasur. Besides this, one also comes across a lake known as Nain Sarovar, a natural pond the source of which is believed to be the tears of Goddess Parvati. During the trek, the pilgrims take a holy dip at the pond and carry the waters back with them too.


Besides the legend of Bhasmasur, the place also has some association with the Pandavas of Mahabharat. According to the local folklore, the presence of huge rocks and boulders between the Nain Sarovar and Shrikhand Mahadev is due to the fact that Bhima was building a staircase to ascend to the heavens. These rocks are thus referred to as Bhim-shila or the rocks of Bhima. Some tales also claim that there are some ineligible writings found on the rocks and these were details of the adventures of the Pandavas, noted by Bhima himself.


It is interesting to find such inaccessible spots being associated with gods. The arduous trek and the tough weather makes access so tough that it does seem reaching such places only an act of divine intervention. Such spots also add to the local places getting its moment of glory, for however short span of time it be.

Posted by This is Utkarsh speaking at 9:05 AM