The month of January is named after the Roman god Janus. The interesting aspect of Janus was that he had two heads, not next to each other, but one behind the other, one facing the front and the other facing the back. The symbolism is very clear, that here was a god who could see both the past as well as the future.  Janus was worshiped during all the beginnings, like the beginning of the year, birth, marriage or an event which had significance in one’s life, besides the harvest.


Many have mentioned that he was the god of transitions, like the transition from primitive life to civilization, or childhood to adulthood, etc.


There is an interesting myth associated with Janus. It is said that during the when Rome was attacked by one of their enemies, the daughter of one of the guards, betrayed the country and guided them in the city. When they tried to cross a hill, Janus made a hot spring erupt under them whereby many were burnt to death and the rest fled. Since then as an acknowledgement of his ability to intervene, the gates of Rome were kept open during the times of war, and closed during peace.


Janus was initially depicted by a bearded face and a clean shaven face, the former implying the past year and the latter implying the New Year. However, many have opined that the bearded face stood for the Sun and the clean shaven for moon. What is interesting to note is that Janus was a mortal King of Rome and was deified after his death and surprisingly there is no counterpart of his in the Greek mythology.


This brings to another similar Egyptian deity, Aker, with a slight difference though. 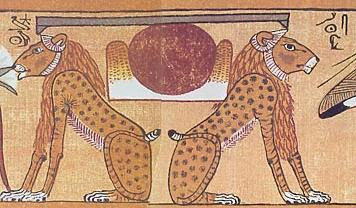 Aker was an earth-deity, who was responsible for guarding the movement of sun, mainly the rising and the setting of the sun. Aker was depicted as two lions sitting with their backs to each other and both facing the opposite directions. However, since this had to do with the passage of sun, the two lions were known as Sef and Duau, meaning, yesterday and today.


Egyptians often kept statues of Aker in homes and tombs as they believed that Aker guarded the gates of morning and evening and would also guard the homes and tombs from evil spirits.


An interesting similarity, though not totally. What is past is for introspection and what is future is about expectation. Let us too look back and see what have we done that can be done differently with a better outcome and ensure that the future is better. Let our yesterday, enable us to improve our tomorrow.


Let us be our own Janus and Aker and life will be different!

Posted by This is Utkarsh speaking at 9:55 AM