NB: Apologies for the title of the article. This is the one that soars heights not the one which dives down at the Box Office! 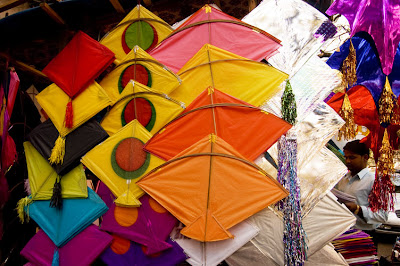 On the day of Makara Sankranti, also celebrated the largest Kite flying festival, better known as Uttarayan. This is a day which sees people on roof-tops flying kites throughout the day and at times even in the evening. The day after the Uttarayan is known as Basi-Uttarayan (or stale-uttarayan) and the fun and frolic continues.

What is it about flying kites? What is its importance and what kind of joys does it bring to us mortals?

Flying kites has been a tradition across the world. Nobody knows the exact place of origin, but many feel that the origins of flying kites can be traced to . In the initial days, they prepared kites of thin bamboo sticks and silk. This was a practice till paper was invented and then kites were made of paper. It was during this stage that flying kites moved beyond to different parts of the world.

We do not find too many references of Kites in mythology, but the Maori’s of used to believe that Kites were the connectors between the heavens and the earth. There are numerous references of folk-heroes travelling on a kite to the heavens or chasing someone over distances on a kite, etc. Flying Kites in ancient was a great religious occasion and nowadays the same has been renewed as a cultural aspect.

Many cultures have seen kites as messengers and a means to communicate with the gods who resided in the heavens and thus the act was a religious act, and not just that of fun and frolic. According to a Japanese myth, a mythological bandit flew on a massive sized kite stealing the gold leaf from the dolphins for decorating the towers of a palace. However, he could not go further as he was soon executed!

Flying kites have had its moments of scientific excellence too. We all know how Benjamin Franklin had used a kite to prove that lightning was a phenomenon of electricity. The Second World War had seen the usage of kites for spying activities. Finally one can’t help but acknowledge the contributions of the kites in the development of the early flying machines. Today it is a world-wide sport.

Kites give vent to man’s quest to soar heights in the sky and rise thru the clouds to heavens and knock at the celestial doors! Unfortunately, in the process it cuts thru the birds and injuring both our aerial friends and at times themselves too. If only we leave flying kites to an environment friendly method and refrain from using materials like glass, etc. the sky would be one beautiful and a colourful canvas on this day!
Posted by This is Utkarsh speaking at 11:03 AM