Last time we read about Kharchi Puja of Tripura. Fifteen days after the Kharchi Puja, (July 30, this year) comes the second most important festival of Tripura called Ker Puja. However, contrary to the celebrations marking the Kharchi Puja, Ker as the name suggests, is marked with a sense of austerity and seriousness.

After the ritual cleansing of earth (during Kharchi Puja), all the gods and goddesses are now sacred and the entire atmosphere is ‘clean’. The Ker Puja is to honour the guardian deity of Tripura called Ker. A large piece of bamboo bent in a particular manner becomes the image of Ker to be worshiped. It is celebrated in a designated area, which is permanently earmarked for this event. Prior to the starting of this worship, all expectant mothers, ill and terminally ill patients are removed from this area. Once the worship starts, no one can leave or enter the area which has been earmarked for the event. If anything of such nature happens, including a birth or a death, the ritual has to start again at the expense of the person who caused the event. In Agartala, the capital of Tripura, an area has been designated for such event. 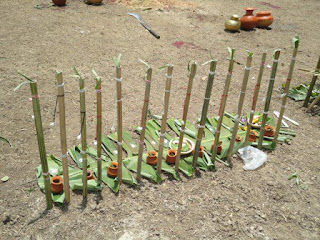 Another aspect of this worship is that once the ritual starts, nobody is allowed to speak loudly, joke or make fun, speak lies or derogatory about anyone or anything including uttering of slang and obscenities within the designated area. No celebrations, music and dance is permitted too. The atmosphere in the area has to be clean and not spoilt by anything negative, both in thought and actions. Offering animal sacrifices as part of the festival is another important aspect of the worship. 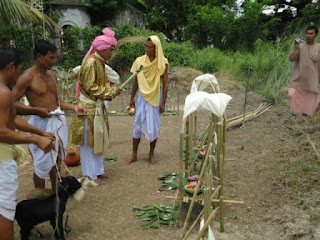 In the olden days, Ker Puja was observed for the welfare of the village, which now is observed for the welfare of the state. The deities are worshiped to ward of all evil including natural calamities like earthquakes, floods and epidemics as well as external attacks. Earlier the King of Tripura used to bear the expenses of the event, but now the state government bears the expenses as a part of the agreement of annexation by the princely state of Tripura with the Govt of India. The beginning of the worship is marked by firing of guns by the State Police to announce the commencement of the worship.

Ker Puja is considered to be centuries old festival which seems to be having a tribal origin. The same is being followed till date with all its austerity and seriousness. Such worships of appeasing nature to ward off its evil effects is a common phenomenon across the world. Different cultures have different rituals to appease such gods and this ritual being followed with all solemnity only bears testimony to early mans fear and reverence for nature, which people say has ‘eyes’ and ‘ears’. Any disregard of its power is reciprocated with vengeance, one of which we saw recently in Utarakhand.

Posted by This is Utkarsh speaking at 9:58 AM