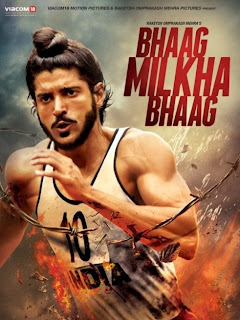 A recent viewing of a very popular Hindi movie, Bhaag Milkha Bhaag has set me thinking a bit and I am reproducing the thoughts here.


Every hero has a reason to achieve his heroic heights, both mortal and mythological. According to Greek mythology, Hercules had murdered his wife in a fit of anger, and so he set out to atone for them and thus goes the tales of his twelve heroic deeds. Perseus set out on an adventure to bring home the head of the Gorgon Medusa just to prove that he was not a good-for-nothing Greek, but was brave and could do what no mortal had even tried to.


In Ramayan, Ram wanted to get his kidnapped wife back and set a regime of rightful rule in Lanka and thus the battle in Ramayan, which saw his heroic best. Hanuman wanted to do anything and everything to please his idol Ram, and did whatever he was told to, in the process, achieving feats which were inhuman. Arjun in Mahabharat achieved his heroic deeds by the sheer dint of reaching a target which none could and become the best archer in the world then. Amba took the birth of a eunuch just to achieve her sole objective of being the cause of Bhishma’s death. Numerous examples abound in different mythologies, where heroes have reached the peak of their heroism, at some point of time for something or the other.


It was no different for the ordinary mortal Milkha Singh. As a child he ran to school to reach on time and avoid being caned by his teacher, and then during the partition, he ran to save his life. Later he ran fast to avoid getting caught by the railway guards. As an army jawan, he ran for a glass of milk and then for the Indian blazer. He continued to run for something or the other, till it became a habit to satiate a particular need. Does this mean that if you do not have a material cause or a need, you do not achieve heroic heights?


No, many have achieved great success out of passion too. Many actors have achieved stardom out of sheer passion for the art and not primarily for the money. Certain doctors have achieved near-god status, out of the sheer desire to cure. Environmentalists have pursued their mission-like objective just to provide a clean atmosphere for the future generation without any gain for themselves. But even here there is an underlying need, excellence.


So what is the underlying common factor among all the above, irrespective of the status of divinity or mortality that sets man, to achieve what is unachievable for many? The word is motivation. Nothing can be achieved without some motivation. Hercules was motivated by getting to wash of the sins of murder, Perseus wanted to prove that he was not a useless son citizen who could not afford a gift for the King on his wedding. Ram was motivated to get his wife back, Arjun wanted to be the best archer on earth and Amba wanted to avenge her insult. Even the mythical characters had an objective, just as Milkha had different motivations at different stages of life.


Without a motive, there is no motivation. Even altruism is a motivation behind donating huge chunks of personal wealth!


What is your motivation and what does it want to achieve? If all of us ask this basic question, we know what we want and where we have to reach. This objective and the motivation to achieve it, differentiates man from cattle, the leader from the herd.

Posted by This is Utkarsh speaking at 10:09 AM