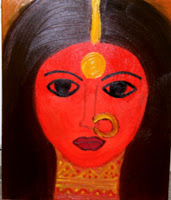 According to a legend from Mahabharata, during the thirteenth year of the exile of the Pandavas, Draupadi saw a ripe jambul, roseapple, hanging from a tree. She plucked it to have it. No sooner had she done this, Krishna came from somewhere and stopped her from eating it. According to Krishna, the ripe fruit was supposed to be the fruit with which a sage was supposed to break his twelve-year fast. Not finding the fruit at its place, could earn the wrath of the sage, resulting in more trouble for the Pandavas and her. Draupadi begged of Krishna to help her out of this impending problem.

Krishna, then said that the fruit could be put back at its original place, only by someone who holds no secrets. Draupadi had only one option and to confess some guilt. Seeing no way out, Draupadi walked up her husband’s and confessed to them, that though she was a chaste woman and loved all the five husbands, there was someone else that she longed for. She always had loved and respected Karna, the arch-enemy of the Pandavas. This was a shock to all the husbands, but none said anything. Having confessed, she went and put the fruit back on the branch of the tree and all was well.

A simple story, and not mentioned in many versions, but considered to be an important episode in many folk renditions of Mahabharata and sometimes better known as ‘Jambul-akhyan’, the jambul-episode. Many well known authors and re-tellers of Mahabharat have explored this angle of Draupadi. All popular versions have mentioned that Draupadi did not love all five husbands equally (not possible for anyone to be capable of equitable love), and that she loved and longed for Arjuna more amongst all the brothers. However, it is also true, that Arjuna had never reciprocated the emotion as he was more in love with Subhadra (Krishna’s sister) than anybody else. The hidden love of Draupadi for Karna is something that has been explored by many writers. Some have even justified the romance, in the sense that the powerful and the dynamic character of Draupadi could find her match only in Karna and not in the five brothers, who were ‘incomplete’ without one another. It is said that even Karna had regretted his behaviour during the disrobing of Draupadi in the Kuru court after she was wagered and lost in the dice-game, and the behaviour was more to avenge his insult during the swayamvar of Draupadi. The undercurrent of an unexpressed romance has always been suspected in the entire Mahabharat.

This myth has dual purpose. One is that everyone has secrets which they keep to themselves. Some of them are not revealed out of fear of antagonising ones loved ones and the fear of losing them if the secret is out. Sometimes it is not revealed as it would upset the apple cart, so as to say. In this case, it did shock the five husbands, but they respected the honesty and the forthrightness of Draupadi and more so because of the cause of revealing the secret, i.e. to avoid earning the wrath of the fasting sage. The significance of a confession is well brought out and the fact that it only does well and seldom any harm.

The second purpose is that through this myth, the Pandavas also get the message that in spite of five brave husbands, they had failed their wife when she needed them the most. When Draupadi was being disrobed after she was lost in the dice-game, none of the ‘brave’ husbands could come to her rescue. It brought out the weakness amongst each one of them, and that Draupadi had a soft corner for someone who was more a man than the five of them. This was an insult which they had to bear without any malice towards their wife. Also, being the wife of five, made her that much vulnerable to such acts, than it did to their own wives, which each had taken for himself. 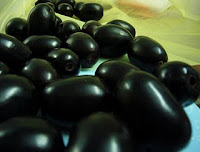 If Draupadi had married Karna would this have happened?

The question could well be, would Mahabharata have happened?

This is the season of Jambul’s. Go get one for yourself and eat it. If it stains your tongue, then it means you too are harbouring a secret!!!
Posted by This is Utkarsh speaking at 9:40 AM