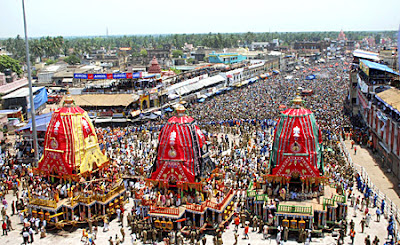 Today is the famous Ratha-yatra festival in India which is celebrated with much fanfare in Puri, Odisha and other Eastern parts of India. Lately, the festival is celebrated in many other parts, under the aegis of ISKCON group.

Last month, I had written a few articles on the similarities of our Ratha-yatra with similar yatras in Nepal and Egypt (http://www.utkarshspeak.blogspot.in/2012/05/ratha-yatra-in-india-and-abroad-part-2.html ). But today we will focus on myths and legends of the Puri Ratha-yatra.

According to the most prominent legend from Skanda Purana, after the war of Mahabharata, King Indradyumna was very intrigued when a travelling pilgrim told him about the practice of worshipping of Nila Madhava (Blue Vishnu) in the region of Nilanchal (Blue Mountains) in the present day Odisha. The next day, Vidyapati, the kings brother set out for the region to have a look at the deity. The Savara king of the region, received Vidyapati and assured him to take him to see the deity the next day, but under the condition that he would be blindfolded to and from the temple. Vidyapati agreed, but took some mustard seeds in his pocket, in which he had made a small hole. The entire route to the temple was strewn with mustard seeds so that the route would be marked with mustard flowers for him to seek out the way next time he wanted to go.

Later Vidyapati returned to his region and told the whole story to King Indradyumna, who then set out to see the deity by himself. On reaching the spot, they were surprised to see that the deity was missing and the whole area was covered with sands from the nearby shore. The King came back dejected. Later he was told by Narada Muni to perform Ashwamedha Yagna to appease Nilamadhava. On the completion of the yagna, they heard a divine voice tell them that his prayers have been answered and that they would find a log floating on the waters soon, which would have divine marks like a conch-shell, etc. The king should carve out images of three gods and install and worship the same. Soon after they found a log of wood floating with such marks and the log was of neem tree. Around the same time an old Brahmin came from nowhere and suggested that he could do the work best as he understood the divine marks, but with a condition that he would do it behind closed doors and would not come out of the room till the idols were ready and nobody should come in before it was ready.

Soon the carving started and everybody grew curious day by day, just as were the King and his Queen. One day they heard no sound coming from behind the doors and the Queen was sure that the old Brahmin was dead. She ordered the doors to be opened. As soon as the door was opened, the old Brahmin vanished from there and there were only the unfinished idols. Since that day, the unfinished idols have been worshipped in the same form. Many say that the old Brahmin was none other than the divine architect, Lord Vishwakarma, himself. 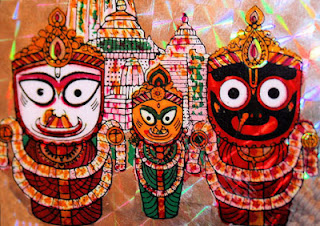 The idols are made of wood, so the idols have to be replaced once in a while. The idols are replaced in the years when there are two Ashad (June/July) months, as per the Hindu calendar, which comes once in 24 years in a well marked event known as the Nav Kalevar. The belief is that in such a year the earth and the universe undergoes some change in its shape and form, and thus the Lord of the universe, Jagannath too receives the same change. The old idols are buried in the temple premises. The present idols were last replaced in the year 1996. The new idols continue to be made, coloured, carved, etc. in the same manner as the original.

The temple is the house for Lord Krishna, as Jagannath, his brother Balabhadra or Balarama and their sister Subhadra. According to a legend, Lord Jagannath had once expressed his desire to spend a week at his aunt’s house. About two kilometres from the Jagannath temple is the Gundicha Mandir, which is supposed to be the temple of the aunt of Lord Jagannath. Since then, every year on the Ratha yatra day, all the tree deities are taken out in a grand procession in three different chariots to Gundicha Mandir. There the deities are taken inside the Gundicha Mandir where the triad rest for a week and return to the Jagannath temple in what is known as the ‘ulta-rath’ or the reverse-chariot.

Some versions say that Subhadra wanted to meet her parents in Dwarka and the procession is to mark this occasion. Some other versions say that Kansa, Krrishna’s uncle had sent his messenger Akrur, to fetch Krishna to Mathura from Gokul. All of Krishna’s friends and his gopis blocked the way and Krishna had to pacify them that he would not be harmed. The ratha-yatra is also supposed to be in commemoration of this separation of Lord Krishna from Gokul and his childhood friends and gopis.

Yet another local version says that the mortal remains of Lord Krishna was transformed in a wooden log which was found by a local Savara (an aborigine of the region) who started worshipping it. Later King Indrayumna took it from him and carved out three idols out of it and established a temple for the same.

There are many other legends associated with the Lord and his chariot. But what is interesting is the origin of the cult of Jagannath and his worship. This we will discuss next.
Posted by This is Utkarsh speaking at 11:38 AM