One of my readers sent me the following after reading “Gandhari and her Karma ” dated June 25, 2012, –

“Hi Utkarsh………, had a question too. Gandhari had 100 sons, as we all know it takes 9 months for incubating a baby (unless they had machines for the same at that time) and if she had 1 baby at a time, by the time the 100th would be born the first one would be 75! So how old was Gandhari during the war? Or did she give birth to all 100 at the same time? In which case, biologically, it would be difficult for all 100 to survive. What do you think?” 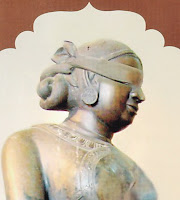 An interesting question and often asked by many. How can someone have 100 sons together or even one after another? Could it be that she had many combinations of twins, triplets, quadruplets, etc. many times over?

Mythology is replete with instances which are known as supra-normal births (beyond the range of normal or scientifically explainable), where births have taken place from fire, any body fluids, like tears and sweat, or from body parts like thigh, etc. This is essentially done, to connote a sense of ‘difference’ on the said character and also to hint that the character is destined to do in-human acts or feats. This was the then author’s way of assigning an importance to the character in reference. We will not get into such instances as all heroes in mythology have had ‘different’ births, like Krishna, Jesus, Hercules, Rama, Ganapati, to name just a few. Mahabharat is full of supra-normal births, be it Dronacharya, Kripacharya, Draupadi and her brother, and of course, Gandhari’s hundred sons.

The birth of Gandhari’s hundred sons, in brief – After Gandhari had conceived it was close to two years and she had not delivered. When she heard the news of Kunti’s children being born in the jungles, she was frustrated and angry and in her state of rage, she started beating her stomach. Soon she delivered a mass of flesh. Vyas had once blessed her with a hundred sons (a common blessing in those days) and when she saw the mass of flesh, he was called. He immediately instructed her to assemble a hundred jars with ghee (oil) in it. Gandhari at this stage expressed her desire to have a daughter too. As soon as the jars were assembled, Vyas divided the ball of flesh into a hundred and one parts and distributed each into the jars. He asked her to cover them and leave them, and soon she was the mother of hundred sons and one daughter.

Many later day thinkers hint at the concept which is better known to us today as ‘in-vitro fertilisation’. Today we know of such methods of IVF and cloning whereby births can be ‘made’ through artificial methods. I am by no means saying that Vyasa was a gynecologist and nor am I saying that people then had knowledge of such modern methods of reproduction. It could just be the figment of a creative writer’s imagination who had imagined a possibility, without going into the intricacies of the method. Also, don’t forget what is said at the beginning of the epic Mahabharata – “What is found herein may also be found elsewhere; What is not found herein does not exist.”

Another theory says that there weren’t a hundred sons, but just two, i.e. Duryodhan and Dushsshan. This gains ground as in the entire epic; these were the only two whose names had cropped up time and again (though later, we have heard of Vikarna, the Kaurava who was against the war). Also, the pregnancy lasting for two years lends credence to this theory. People of antiquity had never quite been able to explain the concept of twins (You can read more about twins in mythology in my earlier series "Twins – A case of peaceful co-existence. " dated May 1, 2011). The two-year pregnancy could have been put in to explain the birth of twins.

Another version is that the evil of Duryodhan was equal to that of hundred people; a concept similar to that of Ravana’s ten heads which implied his immense intelligence and knowledge. Mythology, like fiction also thrives on hyperbole and on a more simplistic note, this could be just that.

Another version takes the help of etymology (the study of the origin of words). Duryodhan means one who is difficult to fight, (‘duh’ – difficult & ‘yodh’ – to fight) representing ego & Dushasana means difficult to control. Representing ‘huge ego’ and ‘lack of control’ as a hundred only gave a sense of proportion to the immense trouble that the duo could unleash.

A philosophic explanation is as follows – Dhritarashtra represented blind mind and Gandhari represented blind intellect following the blind mind. Together they breed unfulfilled desires, dreams and ambitions, all unleashed on what stood for reason and law (dharma). The result of such a clash could only be a war of epic proportions!

The sheer beauty of what the authors of antiquity wrote is brought out by such representations, which to a rationalist mind might seem ridiculous and jest-worthy! Modern thinking should be used to understand the deeper meanings in the myths and not to look down and make fun of what was written way back, when ‘science’ was not a subject. I guess this is what education is all about!

I hope I have been able to answer my readers query!!
Posted by This is Utkarsh speaking at 9:16 AM