In the last story, we read about Kacha and Devyani and how love blossoms between the two, but Kacha could not marry Devyani and both end up cursing each other.

After Kacha leaves the ashram of Shukracharya, Devyani soon forgets all about Kacha and resumes life as if nothing had happened. Devyani and Sharmishta, Asura King Vrishaparva’s daughter, were good friends. Once while playing in the lake, both get wet and while changing dresses, the dresses get exchanged. On seeing Devyani in a princess’s attire, Sharmishta was overcome by anger and rebuked Devyani for wearing her dress, especially when she was not a princess, but the daughter of someone who was in service of her father, and thus a servant. In her anger, she pushed Devyani who fell in a small well, which was not very deep and did not have much water. Sharmishta without giving it any thought left the place in anger. 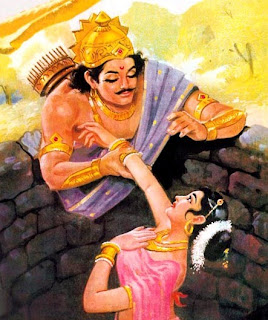 Soon it was dark, Devyani was alone, burning in rage, was beginning to be get scared. The well-known King Yayati of the Chandra vansha (lunar dynasty, one of the most important lineage of the times) was passing by and thirst drove him to the well and soon rescued Devyani. Devyani was moved by his princely looks and the warmth in his touch, while pulling her out of the well and this kindled her love once again. She proposed to marry him. King Yayati on learning that she was Shukracharya’s daughter, suggested that they could get married only after parental consent and left her back at her ashram.

On reaching the ashram, Devyani told the whole story about Sharmishta and insisted that her father leave the ashram as the asura’s did not deserve him. Shukracharya was well aware of her daughter’s anger and knew Sharmishta well and did not want to lend too much credence to the quarrel between the two, but Devyani would not hear anything. Soon the matter reached the ears of the King, who came down to the ashram to apologise. Shukracharya said that he was not hurt, but it was his daughter and if she was pacified then all would be well. The King then approached Devyani, who was now all the more arrogant when she saw the King trying to pacify her. After a lot of pleading by the King, she agreed to relent, on the condition that Sharmishta should be her servant for life.

King Vrishaparva went back with a heavy heart as he could not bear to see his only daughter relegated to a life of servitude. When Sharmishta, who was beginning to realise her folly came to know about it, she immediately agreed to Devyani’s conditions, as Shukracharya was very important for the well-being of the asuras and after all she was at fault. The King agreed and Sharmishta was sent as a servant to Devyani.

Soon King Yayati and Devyani got married. Shukracharya had agreed to the alliance as he knew that no rishi would get married to the hot-headed Devyani and had made Yayati swear that he would not take another wife and would be loyal to Devyani all his life. After marriage, Sharmishta accompanied Devyani to King Yayati’s palace and soon, love blossomed between Yayati and Sharmishta. Sharmishta was of royal lineage and knew how to take care of men, whereas Devyani was a bundle of arrogance. The two started meeting in secret, since Yayati could not get married to Sharmishta, lest he incur the wrath of Shukracharya. All was going well, till Sharmishta delivered Yayati’s son. When Shukracharya came to know about it through Devyani, he cursed Yayati that he would turn an old man immediately. This way, he would burn with desire but would not be able to satisfy the fire burning within him.

King Yayati rushed to Shukracharya and pleaded that he be not punished in such a manner. Later Devyani too joined Yayati as she did not want to live with a dying old man. Shukracharya suggested a way out. He said, that if any of his sons, agreed to exchange their youth for Yayati’s old age, then he could be young again. Yayati called his sons, from Devyani and Sharmishta and told them about the curse and said that whoever agreed to exchange his youth with him would be declared the King. Devyani’s son, Yadu declined, but Sharmishta’s son, Puru agreed. Soon Yayati gained his youth, but left Puru an old and dying man. Yayati went back to life of wine and women for many years till he realised the vanity of it all.

He came back to his son, and gave him his youth back. He then declared Puru as the King. When Yadu objected to it, since he was the son of the rightful queen and also the eldest, Yayati said that Puru had suffered on his behalf and he was promised the throne before exchanging the age. Yayati further cursed Yadu, that he and his descendants would never be Kings ever. This enraged Yadu and he left the Kingdom. Puru was later declared the King and Yadu left the land of his birth and settled down in Mathura.

The story of Yayati is also very important from the perspective of man's inherent desire for everlasting youth, and lengths he would go to attain it.

The descendants of Yadu became the well-known Yadavs in the epic Mahabharata, one of them being Krishna, who too never became a King. The descendants of Puru were Dushyant (of Shakuntala fame), Bharata and further down, Kaurava’s and Pandavas.

Posted by This is Utkarsh speaking at 8:25 AM