The 10-day Ganapati festival started last week and I have not put up a single article on my friend Ganesha, and yesterday I got a knock on my head by his divine trunk! So here’s a short one, for all who missed the deity on my Blog!

Ganapati is a deity revered all over the country. However, as I have mentioned earlier, he is a celibate in South India which is different from the rest of India. (Refer to http://utkarshspeak.blogspot.in/2010/09/ganesh-marriage.html dated 12/9/2010). The reason of his celibacy is a subject which needs an elaborate discussion. But today, let’s see how Ganapati was responsible for bringing the river Kaveri (also spelled as Cauvery) to South India.

According to a legend, to celebrate the marriage of Lord Shiva and Parvati, all the gods, sages, people, birds and animals travelled up to North. This caused a bit of an imbalance on earth, with all the pressure tilting towards the North. Seeing this, Shiva asked Rishi Agastya to go down to the South and ensure that the balance was restored. Agastya was saddened by this task as this would mean that he would not be able to witness the wedding. Lord Shiva understood his plight and told him that he would ensure that he got to view the wedding sitting in South. He then gave some water of river Ganga from his matted locks, so that he could release the waters in South as the region was suffering from a lack of water in those days. 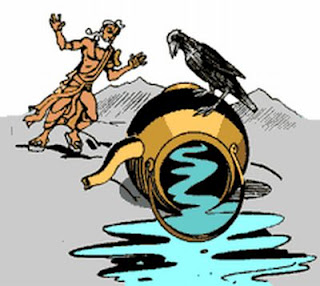 Soon Agastya reached the southern parts of the country, with the waters in his kamadala, a pot, and got busy with his penance and didn’t release the waters. Time passed and unknown to the Rishi, the dryness reached a critical state. Lord Ganesha on the advice of Narada Muni, took the form of a crow, went and sat on the kamandala, thus toppling it and allowing the waters to flow. The river is known as Kaveri, as it was enabled by a crow.

Another version of the story says that the river Kaveri was earlier known as Ponni and had been disrespectful to Rishi Agastya. In his anger, he had punished her by trapping her in his kamandala. On the suggestion of Narada Muni, Lord Ganesha took the form of a crow and released the trapped waters and thereafter the river Ponni was known as Kaveri.

The place where the water was spilt by Ganesha has come to be known as the Thalakaveri and on the site is a thriving temple by the same name, near Bhagamandala in Kodagu district, Karnataka, India.

Quite a simple myth anybody would say. Such myths have a very limited function. They establish divinity to some rivers, which do not have anything as grand as the myth associated with River Ganga. Rivers have been revered in our country and such divine associations go a long way in granting them the same significance as given to some of the Northern Rivers like Ganga and Yamuna, who were both mythological characters. In days when traveling was not very common, such myths lent credibility to the idea that bathing in such rivers was as good as bathing in Ganga.  Another important fact is that the Southern parts of India are known for the cult of Skanda, i.e. Kartikeya, the other son of Lord Shiva. Such minor myths gave some foothold to an otherwise well known deity like Ganapati.

Next we will see another similar contribution of Ganapati to South India.
Posted by This is Utkarsh speaking at 9:15 AM