Its story time friends, stories and only stories, nothing else!!

This is related to times when the Samudra Manthan had not taken place and the gods had not taken the amrut, or the nectar of immortality. During those days, it was only Shukracharya who knew the Mrita Sanjivini Mantra (spell), which had the power of bringing the dead back to life. Thus during the war between the gods and the asura’s, the dead asura’s would be brought back to life by Shukracharya and the gods would always end up losing the battle since they did not have the knowledge of the Mrita Sanjivini Mantra.

Seeing the plight of the gods, Guru Brihaspati suggested that his son, Kacha should go to Guru Shukracharya and learn the spell. Kacha objected to the idea as he could not bring himself to accept anybody but his father, to be his guru. Further, why would Guru Shukracharya accept him as his pupil once he came to know about Kacha’s father? Guru Brihaspati explained to him that as per the ethical norms of teaching, a Guru can never deny knowledge to a deserving student, irrespective of his personal preferences and prejudices and the students parentage. Guru Shukracharya might not teach Kacha the Mrita Sanjivini Mantra and such special spells, but that was on Kacha to ensure that he managed to learn these spells by serving his Guru well. Also, such spells could not be forced out of a teacher; the teacher would have to teach the spells out of his own choice and free will.

On reaching Shukracharya’s ashram, Kacha introduced himself and expressed his desire to become a disciple of Shukracharya. Shukracharya knew the true reason of such an act, but could not deny Kacha his right, and so was accepted as a disciple. Shukracharya, however, had made up his mind, to frustrate Brihaspati, by not teaching Kacha the Mrita Sanjivini Mantra.

Kacha was a devoted student and did all work allocated to him. He served well and soon Shukracharya grew fond of Kacha. Shukracharya’s young daughter too started liking Kacha and without realising both fell in love with each other. The asura’s however, were very uneasy with the presence of Kacha in Shukracharya’s ashram, since they were all aware of the true reason of Kacha’s presence. They were worried that in some moment of weakness or the deceit that the gods were capable of, Shukracharya could end up teaching the Mrita Sanjivini Mantra to Kacha.

One day, the asuras, killed Kacha while he was grazing the cows. When Kacha did not return by sunset, Devyani approached her father with her concern. Shukracharya learnt about his death, through his yogic powers. When Devyani learnt that Kacha was dead, she fainted. When she regained her senses, she appealed to her father to bring him back to life. Shukracharya did so, and Kacha soon returned to the ashram, but this left Shukracharya slightly disturbed. The asura’s animosity towards Kacha and her daughter’s affection towards Kacha were bound to bring more trouble.

When the asura’s came to know about Kacha’s return to the ashram, they realised that eliminating him would not be an easy task. So this time they devised another plan. They once again killed him, then burnt his body and mixed the ashes in wine and offered the drink to Shukracharya, who drank the wine. When once again Kacha did not return by sunset, Devyani got worried and approached her father. Soon Shukracharya came to know everything, but this time the matter was different. If Kacha was to be resurrected, then Shukracharya would die, and if Shukracharya had to live, then Kacha had to remain dead. It was a strange situation for Devyani where she had to choose between her father and her love. Shukracharya held himself responsible for her daughters predicament and swore that he would never consume wine again and also ordained that no teacher should every consume wine, as it hampered his ability to differentiate between right and wrong. 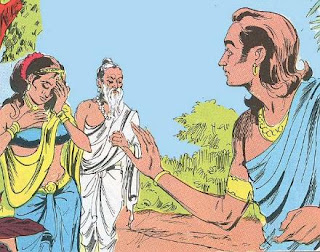 To save his daughter from the trouble, he decided to teach Kacha, who was in his stomach, the Mrita Sanjivini Mantra. On learning the spell, Shukracharya raised him from death, who came out of his body, killing Shukracharya. Once alive, Kacha invoked the mantra and got Shukracharya back to life. Having achieved his task, Kacha decided to leave. When he was leaving, Devyani expressed her love for him and expressed her desire to marry him. To this Kacha expressed his inability to marry her. He went on to say that Shukracharya had given him life twice and once he had come out of his stomach, so this made them father and son, by virtue of which she was now his sister. He could not even dream of marrying her. Shukracharya too was of the same opinion, and also felt that the alliance would jeopardise his relationship with the asuras, since Kacha was the son of Brihaspati, his arch rival.

Devyani, however, felt insulted at the rejection, and cursed Kacha, that he would never be able to use the spell he had learnt. Kacha was offended at her curse and said that it was unfair to curse him, since if he wanted he could have left without resurrecting her father and while he might not be able to use the spell, he would at least be able to teach it to someone, who could use it. He then cursed her that due to such arrogance, no learned man, or a rishi would every marry her.

Thus ends the sad love story of Kacha and Devyani.

Next, we will read about Devyani and Yayati.