Swami Vivekananda – an icon of Hidutva 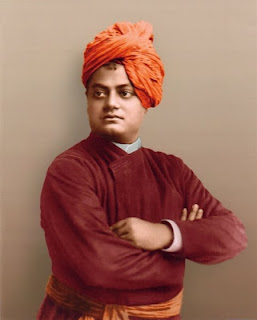 Swami Vivekananda, an icon of Hidutva? Did this offend you? If ‘Yes’, then I am glad as such statements should be considered offensive to the status and stature of Swami Vivekananda.

Lately a certain Chief Minister of our country has taken it on himself to spread the word of the apostle and has ended up interpreting the whole philosophy in his own myopic way. It suits his political agenda, but as proud Indians, we should refrain from falling prey to such sudden ‘adoptions’ of our icons for narrow parochial reasons.

When Swami Vivekananda said “Garv se kaho hum Hindu hai (Say with pride, that I am a Hindu)”, he used the word Hindu to evoke a sense of patriotism and nationalism. For Swamiji, Hinduism was a way of life, a philosophy, the essence of which he had gathered after intense study of the ancient scriptures and intellectual debate. Unfortunately, people who know nothing of the ancient philosophy called Hinduism are misinterpreting the quote to suit their political agenda, probably for want of a cause. If only this statement was used to instill a sense of pride for the nation, it would have gone a long way, especially when the spirit of nationalism is at its lowest! Using the quote to give vent to ones divisive political agenda is the largest disservice that can be done to the name and stature of Swamiji.

Anybody who has read Swami Vivekananda’s Chicago address, which was delivered way back in 1893, has no choice but to appreciate Swamiji’s vision of religion and above all co-existence of every religion. No wonder, that the gathering was spellbound and shocked to hear a monk speak about the broad-based ‘concept’ of Hinduism, which today is being tarnished by dirty, blood-stained hands, who know little and pretend more.

The following is an extract from his Chicago speech –

“The seed is put in the ground, and earth and air and water are placed around it. Does the seed become the earth, or the air, or the water? No. It becomes a plant. It develops after the law of its own growth, assimilates the air, the earth, and the water, converts them into plant substance, and grows into a plant.

A champion of secularism, whose ideas of religion is beyond the comprehension of certain class of people, should be left alone. Unfortunately, in our country, we raise our voices on slightest and silliest of issues, but choose to keep quiet when such national icons are misused and misrepresented. Swami Vievekananda is a national hero and definitely not the hegemony of a certain political class. As Indians, we should shun such public posturing by certain people and the least that we can do is raise our objections.

Posted by This is Utkarsh speaking at 9:31 AM