A well desired effect has been the cause of much merry amongst a section of people whom we call politicians in India. The cause of the merry making is the effect of discord within Team Anna. Anna Hazare has been making statements denouncing Arvind Kejriwal’s steps to form a political outfit, much to the embarrassment of Kejriwal and his supporters. Media has been reporting every action of both 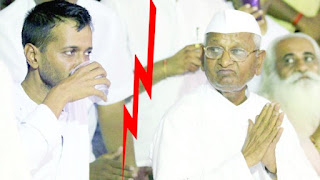 Has Anna lost the steam when provoked to come to the forefront and fight the elections? After all, to make a difference in a system, one has to be a part of the system, isn’t it?

Has Kejriwal developed political ambitions, now that he has seen crowds swell in the numerous agitations that he has been a part of and in some cases led by him? Is it his firm belief that he has to be a part of the system to make changes in the system or is it plain avarice for power, as mentioned by a few of his detractors?

Is there a conflict between the well known crusader Anna Hazare and the new face of the corruption movement, Arvind Kejriwal? In the conflict, who is at fault?

Let me tell you a small story from the epic Mahabharata.

During one of the exiles of the Pandavas, Arjun, set out all by himself. The main objective was to form alliances with different rulers for the future confrontation with his cousins, where he would need support. During once such visits, he visited the abode of Lord Indra (also his father) and enjoyed the joys of Amravati. Among all the apsara’s in Indra’s court, he kept staring at Urvashi which was observed by all including Urvashi, who seemed to be smitten by the good looks of Arjun. Later Urvashi, who could not control herself, came over to Arjun and expressed her desire to make love with him. Arjun looked shocked and expressed his inability to do so. He referred to her past relationship with Pururava, Arjun’s ancestor, by the virtue of which, Urvashi was his mother and that’s exactly why he was staring at her. (The myth of Urvashi and Pururava is another interesting myth, which we will discuss on some other day) 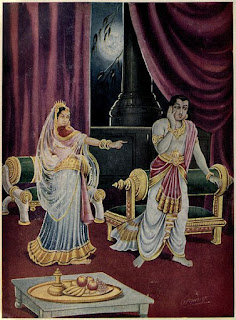 Urvashi was enraged and informed Arjun that this was outrageous and such norms did not apply to the gods, but Arjun could not agree with her proposal. This spurn by Arjun insulted Urvashi so much that she cursed him, that henceforth, Arjun would be incapable of making love to any woman, if not her. (Later, with the intervention of Lord Indra, the curse was reduced to being in this state for just a year, which Arjun used to his advantage during the last year of the thirteen year exile when the Pandavas had to live in a disguise.)

Here is an example of conflict, where both were right. According to Urvashi, she was not a mortal and such rules of mortals were not applicable to her and thus she found nothing wrong in the proposition which Arjun found indecent. Also, what was a case of momentary passion for Urvashi was an unthinkable incestuous relationship for Arjun. This shows that conflicts do not always take place only when one is right and the other is wrong. It can occur even when both are right, as in this case, though, one had to suffer.

In the case of Anna-Kejriwal conflict too, both seem to be right. Anna considers himself to be a crusader whose role is to bring issues out on the forefront and stir a movement, in what he feels is a civil society agitation. But Kejriwal feels that, times have changed and people have opined that to make changes in a system, one has to be in the system. Civil society agitations today are seen as mere opposition, wherein the opposition does not offer much in terms of an alternative solution. There is also the case of difference of opinion due to generation gap. Anna is a Gandhian who has lived all his life under the influence of the apostle of non-violence. Kejriwal is a product of modern India, who believes that good politics and good politicians (an oxymoron in the present times) is a must and all he is trying is to usher in a new era in a pathetically gloomy situation created by the present set of politicians who have formed a ‘coalition’ to loot the country, irrespective of political affiliations.

In such a scenario, just who is right is the not the issue, since both are. Difference of opinion needs to be respected in this case and both need to move on keeping in mind the greater good behind the cause, detractors notwithstanding!

The above painting of Urvashi cursing Arjuna is courtesy Ramanarayanadatta Astri (Wikipedia)
Posted by This is Utkarsh speaking at 10:04 AM