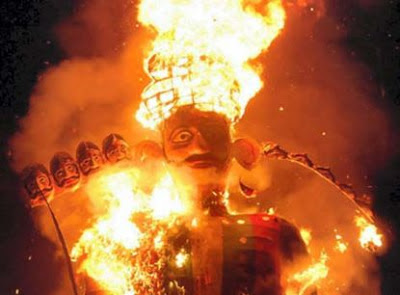 So yesterday on the occasion of Dusherra, Ravan was burnt with all the fanfare and celebration that goes with the victory of good over evil. In my last couple of articles, we have seen that Ravan was quite a good King and his subjects were very happy under his rule. He was also religious, as he was ardent devotee of both Lord Brahma and Shiva. In his previous births, he was in service of Lord Vishnu.

Legend has it that when Ram had to conduct a puja before the war with Ravan, the rituals were presided over by none other than Ravan himself as there were no Brahmins in that area. Knowing well, that the rituals were to be conducted against his own self, he followed his duty of a Brahmin well. Ravan is supposed to have parted with his knowledge of administration to Ram before he breathed his last. Ram is supposed to have accepted Ravan as his guru for that brief moment and what we know as Ramrajya (rule of Lord Ram) is nothing but based on Ravan’s knowledge of administration. Finally, Ram had even to undergo penalty for killing Ravan, as killing Ravan was akin to brahma-hatya, killing of a Brahmin, a grave sin in those days.

Then why is Ravan still the villain of the epic? Why do we still burn his effigy every year, year after year with such joy and élan?

Ravan was the epitome of manhood but in the epic he has been shown as what a man should not be. Despite all the good qualities, the major error in his character was his hubris. He was a walking embodiment of pride and arrogance. In Hindu mythology, folklore, etc. pride and arrogance has been treated with a lot of contempt and has always been looked down upon, even amongst gods. Many a god has been humbled when pride sets in him. Why are we so averse to Pride? Pride and arrogance steals humility from man and when he loses his humility, he loses his ability to distinguish between right and wrong.

Ravan had lots of good qualities for which he was awarded with boons and recognition too. But all the virtues are what they are only when they are accompanied with humility and not arrogance. He is a stark contrast to the maryada-purshottam (man among men) Lord Ram.

With reference to the epic Ramayana, however vile be the act of Lakshaman in mutilating Surpanakha’s face, the same cannot be justified with kidnapping of another man’s wife, as an act of retribution. What the author of the epic might be trying to establish is the difference between the way of the civilised and the rule of the jungle. What Lakshaman did was not a civilised act, but then Ravan was a King and an extremely educated and well-versed one at that. Where did all the education and knowledge go when faced with a personal crisis of sorts? Was it fair for a King to endanger his entire kingdom for what was apparently a personal problem? A good King and an able administrator must distinguish between what is a threat to his persona as against his nation. It is not that he did not have good advisors – Mandodari, his wife did advise him to give up his claim on Sita and so did many others. But Ravan was consumed by his hubris and thus could not distinguish between what was wrong and what was not.

The long and short of it all is, that yes, Ravan was unparalleled in his stature, but such characters whose vision is impaired by pride and arrogance can be annihilated by even a mortal. No matter how virtuous one is, a single vice can be fatal and unpardonable. In Ravan, we see the fatal in abundance and thus all the boons and virtues are of no help during the final act. 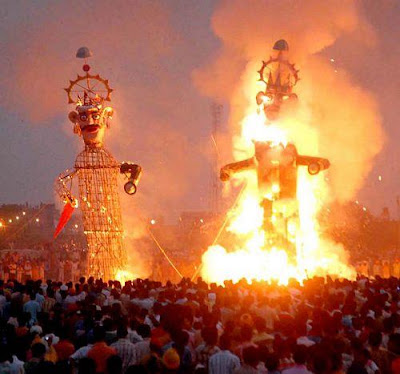 The burning of Ravan’s effigy is not to be seen as burning of the character of Ravan, but burning of the evil in the character. When we burn Ravan, we burn all that’s evil in ourselves and around us. If we are not doing that, then we are simply following a ritual, and not participating in the act. There are a number of temples in India dedicated to Ravan, as a hero; I sincerely hope they are worshipping what was good in him and not doing so as an act of being anti-establishment or anti-Aryan!

With this I conclude my series on Ravan. I hope I have done justice to the character who had the capability of heroism in him, but due to a significant error in his character, ended up being an ant-hero in the epic Ramayana.

Posted by This is Utkarsh speaking at 10:00 AM