A recent discovery of a papyrus (a thick paper-like material used for writing during the ancient times) has brought focus back to the controversy of Jesus’ relationship with Mary Magdalene once again. There have been many opinions about Jesus being married or having had a relationship with Mary Magdalene, which has been rubbished by the Vatican, but accepted by many. 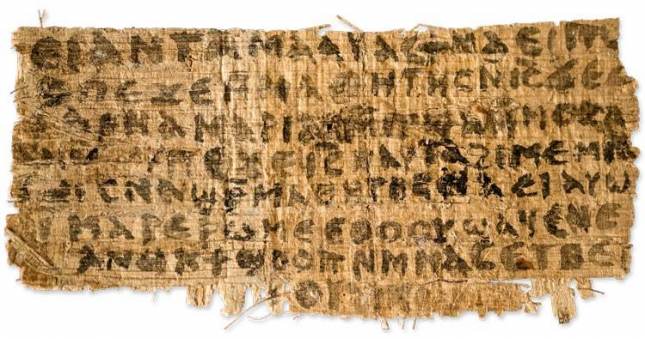 The papyrus, dated back to 4th Century, though is not a proof to the above, has some words which might mean that Jesus was married to Mary Magdalene. But this we will see later, first let’s understand, a little bit about just who was Mary Magdalene, if there was one.

Mary Magdalene was considered to be one of the most devout followers and disciples of Jesus. Many of the Gospels have shown Mary with Jesus right till his end, and Mary was supposed to be the first of all, who saw him after resurrection. Some versions say that she was the first apostle to see Jesus post-resurrection and it was she who was advised to go and inform the other apostles about Jesus’ resurrection. It is for this that many have referred Mary Magdalene as the ‘apostle to the apostles’.


Many have said that Mary was a prostitute who was reformed by Jesus; however, some claim that it was not Mary Magdalene, but Mary of Bethany. This confusion is understandable, as Jesus was surrounded by many Mary’s, one being his mother, the other being Mary Magdalene and many other women by the same name, since Mary was quite a common name then. Also there were many who were similar to the description of Mary Magdalene, and thus the confusion. Also, there have been numerous instances when Jesus has been referred to have kissed Mary, however, this cannot be seen as an ‘evidence’ of the relationship, as greeting a fellow Christian believer by way of kissing was a common practice then.

The papyrus found is of the size of a credit card and has words which translates to “Jesus said to them, ‘my wife’”, might mean that Jesus is referring to Mary Magdalene. Harvard Professor Karen King has said that Jesus was married to Mary in the early part of her career and with this she feels she has reached closer to conclude that Jesus was indeed married. However, Vatican has released a note that they do not agree with Prof King’s ‘findings’ and negate it.

One of the arguments that scholars put forward is that bachelorhood was a rarity in adult male Jews during the time of Jesus Christ and was considered to be a sin as according to a divine commandment, they were supposed to “Be fruitful and multiply”. Also, Mary Magdalene appears very often in the life of Jesus, as compared to other women, and was with him right till the end of his life, something that would be expected only from a wife.

What is interesting is the aggressive stand taken by the clergy on insisting that Jesus was a celibate. Would his married status reduce the divinity of Jesus? Would his married status rob him of the cause that he lived and died for by sacrificing himself for the children of God? Why is the tag of a celibate so important? After all, divinities from all religions have had wives/consorts, be that Buddha, the Prophet or the entire Hindu Pantheon. Would Jesus’ taking a wife, imply that he too had human-like qualities or that he loved a particular woman more than the others, thus negating the theory that Jesus loved all equally? Seems like Jesus’ marital status has more to it than what any of us mere mortals would understand!

Matters of faith have always been judged by the heart, and logic does not find a dwelling place in the heart. But with the changing times, shouldn’t we be more forward looking rather than take recourse to what was said and implied thousands of year’s back, which might have been relevant to the times? Should a single act, if true, reduce the halo of an already elevated person?

Food for thought or should I say, a little wine for the soul!!

Posted by This is Utkarsh speaking at 10:10 AM