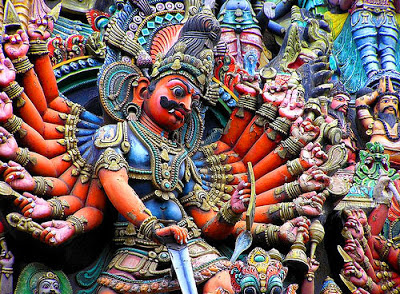 Some time back, I wrote about Ravan’s family (Ravan's Family – Kumbhakarna, Ravan's Family – Surpanakha , ravans-family-meghnaad , ravans-family-vibhishan ). Some of my readers felt it strange that I left out Ravan himself. Was I playing safe and being politically correct? My answer to all is a loud No. I am a great admirer of Ravan as a character who had lots to admire about. A few aspects of his nature were definitely not what can be considered to be ‘popular’, to put it mildly, but even with them, the character of Ravan needs some critical appreciation.


Critics might question the timing of this article, especially when the nation is getting ready to burn effigies of this character, but then, man today is more rational than when the rituals started. I am hoping that today we can differentiate between what is good and what is evil and at the end of it all we will burn only the evil and retain all that is good.

Ravan was born to a Brahmin sage Vishrava and the Daitya princess Kaikesi (it is important to note that the word ‘daitya’ should not be understood as a giant; this could just be a community during those times, however, strength was a quality with this community as mentioned in the myth). It is said that Kaikesi’s father wanted her to marry the most powerful person on earth, so that they could produce exceptional children. He rejected all the kings, as none were greater than he. Kaikesi then identified sage Vishrava, but unfortunately she had approached him at an inauspicious hour. Vishrava warned her about this as this implied that her children would have evil leanings, but nevertheless agreed to marry her. Thus Ravan was half Brahmin from his father’s side.

Ravan is sometimes referred to as Dashamukha, implying that he had ten heads. In mythology, such references are significant. Some sources say that he was so named as his face reflected ten faces from the crystal necklace that his father had gifted him on his birth. A more commonly accepted explanation is that he was so intelligent, that he had the brains of ten people. Under the tutelage of his father, Ravan is supposed to have learned all the Vedas and other holy scriptures. He was also well-versed with the art and crafts of the Kashatriya community. Under the guidance of his maternal grandfather, he was well-versed with all the ethics of the Daitya community. He is also depicted with twenty hands, once again implying that he was very strong or that his strength was equal to that of ten people. He was gifted in music too, and was supposed to be an excelled Veena player.

Ravan is supposed to have undergone a severe penance to propitiate Lord Brahma, who pleased with his penance, granted him a boon. Ravan asked for immortality, but Brahma denied the same. Ravan then asked for invulnerability from all gods, and other heavenly spirits, besides demons and all kinds of serpents and animals. It was beyond his stature to ask for invulnerability from humans at that stage of his life (which is why Vishnu had to take the human form of Rama later in the epic).

Armed with the boon of invulnerability he was made the head of the Lankan army by his grandfather. But Ravan was not satisfied by just the leadership of the army and so asked for the entire Lanka, which was ruled by his elder brother Kuber. His grandfather suggested to Kuber to concede to his suggestion as Ravan was unbeatable. Though Ravan is supposed to have usurped the throne of Lanka, his subjects were very happy and satisfied under his rule. It is said that even the poorest of the poor in his kingdom had utensils of gold and hunger was not known to anybody. The fact that later poets have called Lanka a kingdom of gold could just be a metaphor for the great rule and life under the rule of Ravan.

Ravan was a great devotee of Lord Shiva. Once Ravan tried to please him by trying to take his abode with him to Lanka and in his devotion, he tried to uproot the entire Mount Kailash. Seeing his abode shake, Shiva got irritated with him and pressed him down with his toe. The pinning down was both painful and also a lesson of humility for him. To please Shiva he sang paeans in honour of Lord Shiva for many years. In Shiva’s honour Ravan is supposed to have composed the Shiva Tandav Stotra, a form of dance worship. Pleased with his devotion, Shiva had gifted him the coveted weapon, the Chandrahas (moon-blade), and Ravan became a life-long devotee of Lord Shiva.

The episode has been very beautifully carved out in one of the sculptures in Ellora Caves, Maharashtra, India – 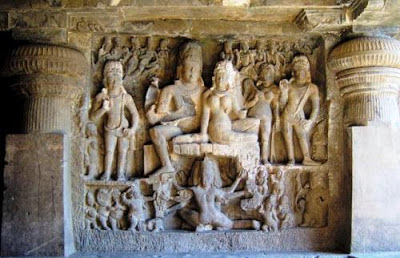 Next we will read about Ravan and women in his life and his alleged misdemeanours.
Posted by This is Utkarsh speaking at 10:26 AM