A recent TV show has brought back the discussion on Caste System. Since childhood (which was quite a long time back!), we have read about the ills of Caste system, but am surprised to see the same thing being discussed and I recently found myself teaching my child about the same. The discussion brought up many things, besides the issue that is caste pre-decided? Does one inherit a caste based on his birth? To rephrase it, is caste more of an accident than choice? Was this how it was envisaged in the first place?

Well, as they say, let’s begin at the very beginning….

According to the Purusha sukta (Purusha sukta is a set of hymns from the Rig Veda which deals with the subject of Creation); every aspect of the universe was created from the cosmic Purusha, man. From his mouth, arms, thighs and feet were born the four varnas, or classes’ of people, viz. Brahmins, Kshatriyas, Vaishyas and Shudras. The apparent objective of this class-based society was division of labour. The Brahmins were to take the responsibility of teaching (which also involved research and upholding the religious and related institutions). The Kshatriyas were to take care of all the people, govern and provide security to their subjects. The Vaishyas were entrusted with carrying on the responsibility of business, which was farming and cattle-rearing, besides doing all such acts that generated revenue. Finally, the Shudras were to provide services which could be in the form of providing labour. Division of labour is not an unheard subject; rather all societies (and organizations) work towards this. 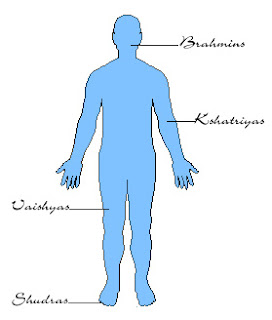 It is here that things have gone haywire. The caste system was purely for division of labour and if someone was good in another area, they were not stopped. There have been examples of such crossing of caste barriers which have gone down well with the-then powers-that-be and nobody has quite raised even an eyebrow. Let us see some examples –

Sage Vishwamitra – Vishwamitra was a Kshatriya ruler, Kaushika. Once King Kaushika stopped by the hermitage of Sage Vasishta, who ensured that the King and his army were treated to a lavish meal. Kaushika was surprised at the arrangements and enquired of the Sage about such arrangements. The sage told him about his calf, Nandini who had provided for everything needed for the meal, and that the calf was the daughter of Lord Indra’s cow, Kamdhenu. On learning this, the King asked for the calf as he could do more justice to its powers than a sage in a remote hermitage, and even agreed to pay a price for her. When the sage declined form parting with it, Kaushika tried to take it away by force. Sage Vasishta, then through his yogic powers waged a war with the army of the King and soon took the King as a prisoner. The sage pardoned Kaushika and let him go. Kaushika then learnt a lesson that power was not in physical strength or in an army, there was greater power in knowledge and from that day, he started his quest for this power in the form of penance. To cut a long story short, after many trials, he was accorded the title of Brahmarishi by none other than Sage Vasishta himself. An example of a Kshatriya becoming a sage and being accepted by the community.

Parashuram – Parashuram was not a Kshatriya, but all that we know of him has to do with wars and battles. His rage against the Kshatriya caste is well known and is said to have spent a lifetime in eliminating the Kshatriyas from the face of the earth. Whatever one knows about Parashuram, has got to be with his acts of warfare and his teaching the said skills to some of the well known characters of Mahabharata, like Bhishma, Drona and Karna. His association with axe as his weapon is also well know.

Dronacharya – Dronacharya in the epic Mahabharata was born as a Brahmin. His youth was spent in poverty, but he trained under Parashuram, and was an expert in the arts of weapon and warfare. Later he goes on to become the military teacher for the Pandavas and Kauravas and was also a general during the war of Kurukshetra. A Brahmin, who was an expert in the art of war and weapons.

Finally, an example from History. 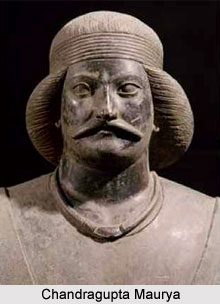 Chandragupta Maurya – Chandragupta was a Shudra, but went on to become the ruler of the Magadh Empire and he was brought in to rule, by none other than a Brahmin, Chanakya. Chanakya had to face strong criticism and opposition from the then clergy who opposed this move of his, but Chanakya argued and stood his ground. During one such argument, he is supposed to have said that the caste system, did not allow anyone to inherit ones caste based on ones birth, but it had more to do with one’s ability and capability. Chandragupta went on to become the founder of the Mauryan Empire and was also credited to be the first unifier of India and one of the finest Emperors that India has seen.

Detractors will say that the caste bias existed in the epics which I have quoted, and is visible when Dronacharya declines from teaching the likes of Karna and Eklavya saying that they couldn’t take training under him since they were not Kshatriyas. I would see this not as an issue of caste, but more as a case of favouritism. Arjuna was Drona’s favourite and he wanted him to be the best archer and that was the driving force behind not training the two.

This brings us back to the issue of caste system as many of us know it. The ills of caste system and the exploitation started centuries back. This happened when the interpretation was changed from a logical division to the politics of division. The masters of interpretation became the twisters of many a fate. Once the practice of Sati had sanction in religious texts, but it did not find any place in a modern society. Human sacrifices and animal sacrifices have given way to symbolic sacrifices of vegetables. Many such aspects have been given a decent burial and we have moved on, without hurting anybody’s religious sentiments.

Why can’t the same happen to the caste-system, which has outlived its time and relevance, if any?