There are a number of versions of the origin of the games, and let us go through some of them briefly. 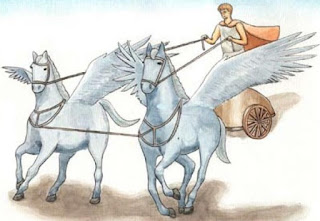 One of the main versions is related to Pelops and King Oenamaus of Pisa or Olympia. Pelops was a handsome youth, who had learnt chariot racing from none other than Poseidon, the god of seas (and who was in love with Pelops). Pelops fell in love with the Hippodamia, the daughter of King Oenamaus. To marry his daughter, the suitor had to defeat the King in a chariot race and the loser would be put to death, and the King had already executed twelve suitors. (Many say that the King did not want anybody to marry his daughter as he himself was in love with her! However, another version says that he was aware of a prophesy, that his son-in-law would kill him). But Pelops was determined to win, by hook or by crook. So he invoked Poseidon and reminding him of his love for him, sought his help. Poseidon gave him a chariot with winged horses. However, Pelops was still not sure, so he bribed Oenamaus’s charioteer, who while preparing his chariot the night before the race, inserted wax linchpins instead of bronze ones in the axle of the chariots wheels.

Another version credits the origin of the Games to Hercules. Hercules was the son of Zeus and his mortal lover Alcmene. Due to some twists of destiny, Hercules was subjected to twelve labours, which were not only tough but also near impossible (giving rise to the well known phrase ‘herculean task’). As part of his fifth labour, Hercules was supposed to clean the Augeian Stables in a single day. Augeias was the King of Elis and he had thousands of cattle in his enormous stables which were not cleaned for ages. To complete this task in a single day was near impossible, so the King had agreed to part with one tenth of his cattle as a price for the cleaning. Hercules diverted the course of two rivers, Alpheius and Peneius to flow through the stables and cleaned the stables in no time. King Augeias however refused to honour his bargain and Hercules after completing his twelve labours waged a war on Elis and killed Augeias. Hercules is supposed to have instituted the Olympic Games in honour of his father Zeus. It is said that it was Hercules who taught men to wrestle and it was he who measured the length of the race by placing one foot in front of the other, six hundred times, measuring the length of the first footrace and also ascertaining the length of the stadium which was built for the Games. Hercules is also supposed to have planted the sacred olive tree which was later used for making the crown of the Olympic victors.

Yet another myth says that it was Zeus himself who had started the Games to celebrate his victory over Cronus. In the first games held, only the Gods had participated and Apollo was credited with most of the wins in the games. Apollo is also supposed to be the first victor of the first Olympic Games due to his blazing speed and great archery skills. These games of the gods were supposed to be the predecessor of the ancient Olympic Games. Zeus is supposed to have hurled his thunderbolt identifying the location of Olympia in Southern Greece, where a temple was built in honour of Zeus, which does not exist anymore.

All these myths only go on to lend credence to the divinity associated with the Ancient Games.

Next we will read about Women in Ancient Olympics.

Posted by This is Utkarsh speaking at 9:51 AM