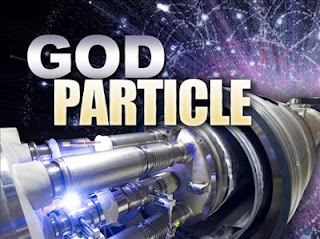 The Higgs Boson Particle or the God Particle has stirred a hornet’s nest in the sense that its opened or rather re-opened the debate of religion and science. The triumphant images of Scientists feeling euphoric about the yet-to-be-declared-great-discovery-but-nearly-there, is seen to be believed. Being Indian, I too felt great and the next day read much about Satyendra Nath Bose (the only thing common between us is that we belong to the same state!) & Einstein (nothing common between us!) and indulged myself in some scientific reading and felt good.

But then somewhere, the I in me questioned me as to why was this so important? Just how will my life change due to this yet-to-be-declared discovery? Okay, I don’t understand the full implications of this concept, but then was I living without it quite well and happy, if I may add so. Just how has Mr. Einstein’s “E=mc2” helped me in life, except to add to my troubles when I was in school? If Newton had not told me about gravity, would I be balancing apples in the air? I would still keep then in my fruit-bowl and if today I have my feet firm on the ground, then it has more to do with my upbringing than gravity!

Science is so important and my folks would yell their lungs out whenever they saw my Report card in school (oops, I guess, the cat is out of the bag). In Physics they taught me to use a Vernier Caliper and I never got a single reading right and thank god that I have never needed to use it in my life time. I never needed to see things in Reflections or Refractions; I see them straight, as they say, in-the-eye! The Organics and Inorganics of the Chemistry that my teacher in school struggled with, only made me more Physical (with agitation) then and over time the problems only Compunded and got me into my Elements! Biology was trifle helpful as it told me how to grow plants, which I do only in my namesake balcony and introduced me to some important body parts like the kidney and liver, which needs to pumped with you-know-what regularly and my other body parts which are of great use to me. The teacher did teach me about the brain too, but I guess I lost it to all the science that my folks wanted me to master, to no significant practical use in my later life.

But then back to Higgs-Boson. The world and its neighbor are going gaga (not the Lady this time) about it and I am yet to fathom all about the atoms, or is it the particles? After all the discussions on the telly and the stuff in the newspaper, I understood that the whole thing has something to do with mass and matter. At my stage in life and the people I get to move around, we only understand mass, the bulk of it and matter, the lack of it, and the fact that in many of us, it is inversely proportional!

Well I made my efforts to understand the Higgs-Boson and I understand one thing, there is nothing godly about it, so let’s leave the gods out of it. The gods had nothing to do with the Big Bang Theory; rather I am quite sure that they feel offended about the theory as it undermines their efforts! Gods and their champions have taken ages to put together a theory which is so simple and understandable, no intricate formulae, no thesis and no having to learn the same thing for many years to master it. It is as simple as – “And God said, Let there be light: and there was light.” As recorded in the third verse of the Book of Genesis. I do understand however, that if all were to follow theology, then the worshipers of Science would lose their jobs, so let’s not be as unfair as that. Let this balance between Science and Theology exist as precarious as it can be and lets cheer the finding of a particle just as we celebrate the birth of a god. What do we mere and merry mortals have to lose?

As far as god is concerned, when the discovery of so many particles has not overthrown him from his current position, this one will not make even an iota of difference. So dear god, have no fear, we mortals have our standards very clear, when we send our children for their Science exams, we tell them to pray to you first, don’t we?

We call it a win-win coexistence!